close
What this nature doc lacks in neutrality, it makes up for with spectacle 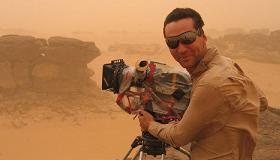 The BBC brought the wonders of the world into the living room. Now with Disney, they've spat them back out onto the big screen. If you've seen Planet Earth, you've seen Earth —in fact, if you've seen every episode, you've likely seen Earth twice as it's made mainly of the greatest hits surveyed in the opening overview episode entitled From Pole to Pole. Still, the smart bet is that many audiences will pay up to see Earth a third time out of the joy of being dwarfed by the glorious big screen on which the humpback whale bobs almost as large as life.

Planet Earth holds the title of the most-expensive documentary ever made. Where the prudent might balk at sending top-of-the-line high definition cameras to steam in jungles, drown in oceans and freeze in the Arctic, the BBC committed itself to the four-year project of preserving images of the world. Though patient (the crew infamously spent three weeks in a bunker to record just one bird of paradise mating dance), the project was born of paranoia. Bear witness to the icebergs now, or risk finding only ice cubes.

Though the project avoids playing doomsayer, by existing, it's inherently political. To watch the majesty of a shark snapping up a seal, or a panoramic time lapse of a field of trees blooming in spring and crumbling in winter, is to be struck by the fragility of life. Our responsibility to protect this ecosystem underscores every image; watching is submission to our call of duty.

Yet, Earth feels compromised where Planet Earth was not. The footage is the same, with some sequences expanded. But it gloms onto the emotions like a tipsy coworker getting too personal at an office party. Fans of the series knew David Attenborough's UK narration was a cut above Sigourney Weaver's. The words were the same, but the images needed an impersonal sheen; Weaver was fine, but too warm—she was the Earth Mother guiding our empathy. James Earl Jones, the narrator here, tends to a grandfatherly good humor. But by holding back, Attenborough made us reach out. The series' signature moment was a sequence where it tracked a starving male polar bear across the sea to a pack of walruses—his last shot at a meal. Weakened, the predator pawed at their backs. They huddled. They panicked. And we realized we no longer knew who to root for: death was at stalemate. In those desperate moments we were struck by the brutal trade off of existence and it reflected back on our own approach to life. Who was our last meal? Whose labor got it to us? Neutrality—not opinion—provokes.

Earth isn't neutral, and there are two choices at fault. Writer-directors Alistair Fothergill and Mark Linfield—both men deserving of accolades—were convinced that audiences needed a smaller approach to the planet. Instead of presenting us the world, they offer three migrating families—polar bears, humpback whales and African elephants—and what wonders unseen in their tales, they splice in. In giving us families, they've given us cloying anthropomorphization. Where Attenborough once intoned about "a female and her pup," we have "a mom and her daughter." Animals are now "she's" and "he's"—their lives made suburban personal, and therefore smaller. Could this be the sticky hand of Disney? It turns the starving polar bear into a "dad," though we never see him with his alleged cubs, and in nature, his species (like most) follows a parental model best illustrated by the Brothers Grimm. If we're meant to care even more about his predicament, then it throws off the moral balance of his duel with the walruses, and if he fails, we're strapped with the guilt that those two cubs, I mean "kids," across the ice are now—gasp!— orphans.

I hope Earth makes a mint. It deserves to, if only to encourage more grand projects. But if you've seen the original show and just want to see it bigger, I recommend you take a cue from Pink Floyd and bring headphones cued to Dark Side of the Moon —so much the better to bliss out on beauty.