close
If perhaps not life changing, this doc is definitely filled with levity 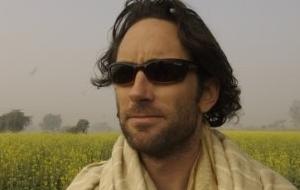 Using a surrogate, Kate Churchill endeavors to test yoga’s power to transform a person’s life. Although a practitioner herself, she decides to record a novice, 29-year-old journalist Nick Rosen, as he immerses himself in it. The choice has both dramatic and deflationary consequences for her documentary, subtitled A Skeptic’s Journey Into the World of Yoga. Thought provoking if never mind-blowing, Enlighten Up! moves toward an inconclusive destination while offering a few glimpses of bliss along the way. The globetrotting excursion will draw acolytes of the yogi’s featured and a smaller number of devotees who feel their personal gurus ought to have been included. Theatres postering for the film wouldn’t do harm to locate their promos near yoga studios.

The film is not meant to be a manual for perfecting your Downward Facing Dog pose, however. There are scant details concerning the different branches and schools of yoga. It’s a theoretical investigation. Where does yoga fall in the taxonomy of human endeavors? Is it a religion? Merely a workout, or a means of gaining physical health? It’s certainly big business. 16.5 million Americans are currently shelling out for mats and OM tutorials. More than once we’re told yoga is whatever people want it to be and can make of it. That’s not very helpful. When people hold forth on the subject, much of the fog is semantic. When they’re pressed to define their terms, things usually get more confusing.

Assuming yoga is first and foremost experiential, the idea is for Rosen to sample multiple flavors and see what appeals. He keeps a journal and Churchill relays his thoughts by pointing her lens at his laptop screen or by having him address the camera and answer questions she poses. He begins at a number of popular studios in Manhattan and then ventures to an ashram in Woodstock, NY before consulting two debunking academics, one of whom has written a book entitled The Sinister Yogi. He meets with a professional wrestler in LA who teaches an irreverent brand of yoga (heavy on T&A) and then spends time in Hawaii with an enlightened guy named Norman. Then it’s off to ground zero, so to speak.

During months spent in India, Rosen hangs with eminent yogis and swamis. He travels to Northern India where Bhakti yoga is a sacred devotional practice, having little to do with physical exercise. Tensions between Rosen and Churchill surface on the subcontinent and become the movie’s primary dynamic. Churchill believes Rosen isn’t giving it his all and grows increasingly frustrated with what she interprets as his passivity. In his defense, he made it clear from the outset that he wasn’t a spiritual person and would approach the project with a reporter’s objectivity and insistence on facts. That said, he doesn’t seem terribly interested in boning up on his subject and we don’t see him do all that much yoga. He’s intelligent but not especially curious. It’s hard to tell whether he’s putting up a blasé exterior, is overwhelmed, or simply not interested. In any case, it’s fair to say there’s a blank at the center of Enlighten Up! and that Churchill is dying to come out from behind the camera and fill it. Eventually, Rosen admits to being homesick and unable to stop thinking about his family. She suggests he’s torn between the influence of his mother, a New Age healer, and his father, a hard-charging attorney. (They divorced when he was a baby.)

While you sympathize with both (and the conflicting instincts within Rosen), Churchill is ultimately responsible as director. At one point, he asks why she didn’t “do it herself?” It’s the right question. Why have someone else spearhead the journey? Was she afraid she’d conclude yoga was bunk? Is she disinterested or is she pulling for a particular outcome? Despite the discord between filmmaker and “guinea pig,” as Churchill describes Rosen, tidbits of wisdom do reveal themselves. While not a system of thought per se, for many people, yoga is an all-encompassing philosophy that includes notions of God, reincarnation and the negation of the will. Perhaps it can best be described as an approach: a way of doing anything and everything. The notion that, with practice, one can simultaneously become more open and more self-contained, more accepting and more disciplined, begins to make sense. Above all, yoga has no use for any distinction between mind and body.

Cheerfulness combined with a robust sense of humor seems to be a quality shared by every yogi who appears in Enlighten Up! They’re each quick to laugh. Indeed, the movie’s zenith is a visit with Dr. Madan Kataria of Mumbai, who founded his own bizarrely uplifting movement—the Laughter Yoga Clubs—in 1995. Watching the “Guru of Giggling,” as he’s known, lead his disciples in a concert of guffaws is arguably the closest Nick Rosen (and Kate Churchill) come to a life-changing experience.