close
Softer (around the edges) than expected 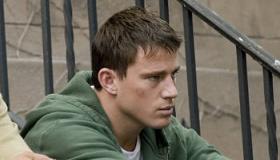 Get ready for lots of mumbling and a little light rumbling. Dito Montiel's follow-up to A Guide to Recognizing Your Saints is a muted, almost neutered homage to Midnight Cowboy that has Channing Tatum poised to conquer New York with his fists. There’s nothing exploitative about Fighting, and you can respect Montiel’s attempt to infuse a genre flick with artiness without finding it absorbing or entirely successful. Business may suffer when audiences lured by the promise of visceral entertainment realize the movie relies so heavily on indirection while also staying safely within conventional boundaries.

Regarding the Midnight Cowboy parallels, Tatum’s character Shawn MacArthur is Joe Buck and Terrence Howard’s Harvey Boarden is Ratso Rizzo. A petty hustler, promoter and ticket scalper, Harvey discovers the Great White Brawler from Alabama on Manhattan's (unconvincingly) mean streets trying to sell phony books and DVDs. Later, we learn that Shawn came north after an altercation with his hard-ass father who coached his college wrestling team. Shawn is a rube but a confident one with a lug’s charm; he makes Mickey Rourke’s Randy “The Ram” Robinson seem like a MENSA chapter head. Thankfully, he’s much younger and still lithe and powerful, though Montiel refrains from fetishizing Tatum’s body. When Harvey asks Shawn at one juncture, “What are you thinking about?” I found it difficult to stifle a “Nada!”

Harvey believes Shawn can make it in the underground fight world and reels him in with the promise of $5,000 for his first bout in a Brooklyn church basement versus a Russian bantamweight. Afterward, they retire to a nightclub where Shawn pursues cocktail waitress and single mom Zulay Valez (Zulay Heao), whom he met the day Harvey spotted him. He also runs into the grappler, Evan Hailey (Brian White), who supplanted him on his college squad. Shawn’s second fight, against a Latin behemoth, takes place behind a bodega in the Bronx where leather-clad lesbians are perched near the top of the food chain. Then it’s on to a glitzy Asian whorehouse for a taste of kung-fu. To keep the ethnic theme in tact, the story builds to a high-priced showdown with his African-American rival Hailey on the balcony of a Wall Street hotshot’s penthouse.

As he did in A Guide to Recognizing Your Saints, Montiel alternates between jagged, frenetic scenes and quiet, reflective interludes. The latter is more prominent here, which is too bad because he has much less to say. He and co-writer Robert Munic neither reveal enough about their characters nor dive headlong into the bare-knuckle milieu. The tension between Shawn and Harvey doesn’t coalesce. Howard makes a reedy effort to garner sympathy for scuffed-up Harvey—a man trying to hold on to his dignity despite the scorn of his former associates (including one played by a low-key Luis Guzman.) It’s an unnerving, failed performance because Howard isn’t given sufficient raw material to work with or a substantial enough personality in Shawn to play off. The romantic triangulation hinted at in the third reel is more odd than poignant. Zulay’s suspicious mother (Altagarcia Guzman) earns laughs during a few scenes that, while comparatively broad, are more realistic than what passes for grit in Fighting.

The brassy hip-hop music echoes Harry Nilsson’s “Everybody’s Talkin’” and Blacksploitation soundtracks in equal measure. It practically functions as dialogue, since not only do the characters have little to say, but it’s often difficult to hear what they’re saying, especially Tatum’s borderline mumblecore pugilist. As for menace and blood, they don’t really materialize. Ditto sexuality. The bobbing camerawork and quick edits are more likely to make you queasy than anything that transpires during Shawn’s handful of short bouts. Working against the most recognizable urban backdrop, director of photography Stefan Czapsky’s doesn’t provide any fresh perspective on New York City either.

Fighting has a nervous, jittery vibe mostly attributable to Howard’s stab at embodying dissolution and disillusionment. But Howard isn’t backed up in this goal, so his tremulousness points toward a lack of commitment to the material on the part of the filmmakers and certainly fails to approximate the pathos of Midnight Cowboy. What Montiel found on the streets of his native Queens in A Guide to Recognizing Your Saints, which he adapted from his own memoir, eludes him in his sophomore go-round. He’s still a legitimate contender in my book, but in Fighting he’s shadow boxing.