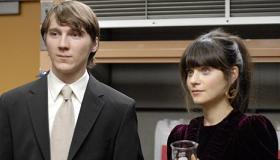 After almost stealing the movie from his more seasoned co-stars in Little Miss Sunshine and holding his own toe-to-toe with Daniel Day-Lewis in There Will Be Blood, Paul Dano is hot. So hot in fact that Gigantic, a lame-brained comedy in which he stars as a mattress salesman whose life is in flux, is bound to attract some interest with arthouse audiences—but they enter the theatre at their peril, for they are entering a laugh-free zone.

Co-writer and director Matt Aselton lists as his influences Luis Buñuel, David Lynch, Jean-Luc Godard, Hal Ashby and Robert Altman—which only goes to prove that one can admire great filmmakers without actually learning anything from them. He clearly aims to make an absurd comedy with Gigantic, but absurdity alone does not make a movie funny. On that score, with curdled humor and cardboard characters, this ghastly movie completely misses the mark.

Brian Weathersby (Dano) is 28 years old, the youngest son by many years of a couple (Ed Asner, Jane Alexander) who were already well into middle age when he was born. The parents may be elderly, but Dad still has a taste for magic mushrooms. Brian himself is much more buttoned-down, with his job selling high-end Swedish mattresses and his ambition to adopt a baby from China. Why a young man whose life is in no way settled would want to adopt a child and why the infant should have to come from China are two questions the movie never bothers to answer. It is a subplot that does offer a bit of creepiness, though, since Brian does not exactly come across as warm, fuzzy, or paternal.

In the space of a day, Brian's life completely changes. First, there is the homeless stranger (Zach Galifianakis) who assaults Brian and then reappears periodically, ramping up the violence of his attacks. Then, wealthy, loud-mouthed Al Lolly (John Goodman) rocks his world when he comes into the showroom to scope out Brian's top-of-the-line mattress. More importantly, Al has a lovely daughter. Harriet a.k.a. Happy (Zooey Deschanel) is a slightly daffy young woman who can no doubt trace her ascendants to the madcap heiresses of Depression era screwball comedies, but who also seems so miserable much of the time that her nickname seems chosen for irony. Coming in to complete the purchase of her father's bed, she promptly falls asleep, a sleeping beauty to complicate Brian's life even as he waits for final word on his baby. A more conventional romantic comedy might have served these characters well, but in the Gigantic scheme of things, Brian and Harriet's love match just seems like one more random act in a movie that is full of them.

Details mount, none of them really leading anywhere, except to underline the absurdity of it all. Aselton and co-screenwriter Adam Nagata are so determined to add an air of surreality to the proceedings that they forget they are supposed to be telling a story and that that story is supposed to be a comedy. Aselton needs to go back over the oeuvres of his cinematic heroes and note that their films are not just collections of absurdist moments, which in the end is all the puerile Gigantic is.