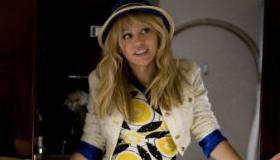 In this feature-length riff off the wildly-popular Hannah Montana show, the titular teen goes from riches to rags, at least for a few consciousness-raising weeks on her grandmother's homestead in the South. Neither a smart nor ambitious film, it trusts in star Miley Cyrus' lanky, smiling charm to fill the vacuum left by its script and director. The film easily measures up to its own low expectations, with all its hopes pinned to a tween fan base that doesn't really care how good it is as long as the outfits are pretty and mom buys them extra gummy bears. A guaranteed win-win for all involved, except restless parents and their pocketbooks.

Miley Cyrus, aka Miley Stewart, aka Hannah Montana races through a life penned by Charlie Kaufman and packaged by Disney. At 12, she auditioned for—and won—a role that would upend any teen, but with the additional masterstroke of rewriting her character to mirror her truth. Real Miley and TV Miley are both girls from Tennessee transplanted in LA. Under the pseudonym Hannah Montana, fake Miley has become the world's biggest pop star, and through the sheer force of Disney marketing magic, so too has the actual Miley Cyrus, who now mirrors back her second and third identities by selling out stadiums as both herself and as the character the character she plays on TV pretends to be.

If that wasn't confusing enough for the now 16-year-old, the actor playing her father on the television show is her real life dad Billy Ray Cyrus. Billy Ray, aka Robby Ray Stewart, does a bit of method acting as a ’90s country star who sidelined his singing career for Miley's well-being. At this point, the Cyrus-Stewarts' reality synergizes and distorts. Robby Ray suggested that Miley develop a secret identity to keep the paparazzi off her back. Billy Ray took heat last year for letting Annie Leibowitz snap his little girl topless. Robby Ray is accepting of—but not cheerleading—his daughter's super stardom, a humility betrayed by his trendy razored haircut. Billy Ray, if you got him drunk, might admit that his fortune is attached to his underage daughter. Her hits eclipse his; their duets outsell his solos. What on earth must the two of them—or five of them—talk about at breakfast? (And the rest of their family, here written off as inessential or dead.)

I can understand why young girls are drawn to the Hannah/Miley show. It fetishizes the humble magic that transforms Miley into the apparently unrecognizable Hannah: the lip-gloss, the mascara, the glitter and white lace-up boots. And the wig—this blonde, Lewinsky-cut bouffant that blinds everyone from noticing that the two teens, both all teeth and legs, are the same girl. The wig has a totemic power. It's She-Ra's toga, Batman's cape and Patty Duke's flip all in one, with the power to command hordes of teenagers (and a healthy chunk of adults) into following its will, throwing their hands in the air like they just don't care and even—yes, even—stirring them to line dance to hip hop. (In this bright Hannah Montana Land, nobody is goth.)

But just as squeal-worthy is that Disney undergoes great efforts to prove she's still a normal girl, just like her fans. When it's time to perform, Miley isn't ushered to the stadium, she tries (and fails) to pick up tickets under own name at will call. Before she goes onstage, her dad smiles, "Don't forget it's your turn to do the dishes tonight." (Would Billy Ray dare do the same at home?) Without the wig, Miley's an unglamorous klutz who can't walk without banging her head—a genetic default of her whole family. Thirty minutes in, we've learned to hold our breath when a china plate or flaming dessert enters the frame. Her only handler besides dear old dad is publicist Vanessa Williams, who mainly exists to take her shopping in Beverly Hills. When Hannah gets into a brawl with Tyra Banks over a pair of stilettos, dad kidnaps his proto-diva and plants her back on the family's Tennessee ranch for two weeks of pop star detox.

Talk about the best of both worlds! Miley pouts, but her fans ache with jealousy. Sequins and ponies! They'd kill their little brothers for just one of her lives. But Miley, forcibly incognito in this humble backwoods town, seems to have a pathological need for discovery. In ten minutes, she's telling the handsome farmhand (Lucas Till) she's BFFs with Hannah Montana. She and her family discuss The Secret whenever crowded by strangers: in a hallway, at a Sweet Sixteen, on Main Street. She chats up the British tabloid reporter (Peter Gunn) out to dig up dirt on the pop star, and when the town needs rescuing to save their meadow from being built over by a big city mall, three guesses which blonde celebrity rushes to the rescue. It's as though Clark Kent zoomed around the office of the Daily Planet with his arms outstretched.

If you are twelve and have any intention of seeing this movie, stop reading now.

The climax of this film (shot and written by Peter Chelsom and Daniel Berendsen—their work so perfunctory it hasn't merited mention) is that after years of sellout stadiums and number one hits, after three seasons of the Hannah Montana show, Miley cracks under pressure. Standing on stage at her hometown's wee theme park, Hannah Montana puts down the mic, takes off her wig, and confesses, "I can't do this—not here." In my favorite moment in the movie, said mic—a spangled, rhinestoned wonder—is immediately taken away by an unsmiling roadie and replaced by—gasp—the plain black mic stand of mortals. Miley apologizes for being human. She plays a farewell song. The crowd likes it well enough. And then they cheer...for Hannah. Does the newly liberated Miley put the wig on? Does she get her princess mic back? Does this have a truly happy ending?

I'm not sure which one of her dads Miley Cyrus most trusts for advice, but whichever Ray most has a foot in reality, I hope they sit their teenage daughter down and tell her two stories about two singers. One is about another blonde from a neighboring Southern state, a girl who kept her own name and all the fame that came with it and was last seen buying Cheetos barefoot in a 7-Eleven. The other is about a country superstar who thought his fortunes would improve if he split himself into two. His alter ego, Chris Gaines, brought down both careers. Fairytale success rarely ends well. Lets hope between all her schizophrenic lives, at least one offers a chance of stability.