close
A dangerous biopic of a living Italian. 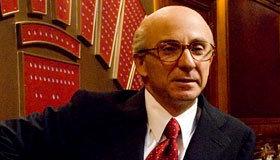 Superagent/producing maven Bernie Brillstein once popped, “You’re no one in Hollywood unless someone wants you dead.” And certainly Italian helmer Paolo Sorrentino’s provocative effort will invite Palermo’s fifth column to aim their wrath in his direction with the cinematic crop Il Divo. Delivered in full is a fact-checked visual censure on an established politico whose decades of absolute rule have drawn a bloodbath of innocents and culpable alike. The intricately calibrated film fits the biopic genre sans the stodginess. Adrenaline addicts pining for a good psychological shoot’em up will be sated with this picture that depicts a stoic leader with ties to the ruthless Cosa Nostra. Expect theatre pews to be peopled aplenty, given the lead actor’s other picture Gomorrah, warming the seats for this inventive Italian import.

Italy’s Nixon is a man named Giulio Andreotti (played masterfully by Toni Servillo) who’s still kicking at 90-years-old. His infamy has earned him a variety of nicknames. Dubbed The Black Pope, The Sphinx, The Hunchback and Il Divo, (translated: divine) the last moniker given in homage to Julius Ceasar who laid first claim to the otherworldly title. The powerful but enigmatic lawmaker is surreptitiously behind several violent acts committed on key figures in and out of his circle—predictably as a measure for silence. A judge, a banker, a rival and an intrepid journalist meet the other end of a gun’s muzzle amongst other death varieties. The onslaught of hangings, poisonings, pipe-bombings and machine-gun assassinations resemble a system of code; like Sorrentino’s own, bloody Dewey decimal system. Red title cards appear and animate with finesse.

Technically, music is paired to scenes as if stitched to a fitting model. And many of the tracks are hypnotic beats blended with classical opuses. What’s more, the cinematography captures certain scenes shot from ground level, gazing upward at the architecture and the grandeur of the characters that dolly along in slow motion. The switchblade style of snappy scenes and quick cuts delivers juicy, visual delight.

Once desensitized to all the fatalities in Fiats you’re introduced to Andreotti’s Faction—a crew with expertise and sway (as in pockets full of votes) who are members of the politico’s inner circle and pimp wiseguy-laced aliases. Each is introduced in slow motion, trance-like reveal. His Holiness is a Cardinal in the Vatican, Lemon is Andreotti’s “right arm” and The Shark is a playboy businessman named Il Ciarra. Each delivers their loyalty to the regime led by the bespectacled Andreotti, an introvert by comparison. And this is just the inner circle. His reach is vast, including a consortium of loyal legislators, money movers, bible thumpers and enforcers, all allegedly ready to serve at his will and with prejudice.

Strong-armed deals run rampant through Italy, leading up to the film’s 1991 starting point. And so the page turns on a seventh term for the infamous statesman Giulio Andreotti. The film forces you to be suspect of your local priest or even the god he supposedly serves. Indictments are handed down to the cast of cronies and an uptick in suicides results before these bad dates get their day in the sun. Andreotti’s iron fist rusts and his party affiliates turn their eyes away. Once the proclaimed ‘Boss of Bosses’ (think of the superior to Al Capone, Vito Corleone, all the five families for that matter and all of Sicily’s Black Hand and you’re warm) is caught, the scales of justice come tipping toward Andreotti’s palazzo. Too many aspersions to count are thrown at Andreotti and still he seems to wiggle out of every guilty verdict with appeal after appeal. The so-called “Trial of the Century” proved underwhelming because the top dog is now a Senator for Life, invincibly sitting at the table to rule on.

The erudite Andreotti shines with oratory skills and enjoys gazing upon his eleven honorary degrees while pedaling on a stationary bike in his study. He has a way of shutting down his critics and outsmarting the wannabe wits that try to take a piece of him. His demeanor always stern, Andreotti carries himself hunched-over likes a tortoise while he slithers about sickly. A dream sequence cum soliloquy exposes the guilt of migraine-afflicted Andreotti, who confesses to his crimes in spitfire fashion. The scene shocks: it’s harsh and uncomfortable to be the interlocutor. Maybe that’s the subtext to the film. We always say we want to know the truth. But it is the truth—a scarring and sharp-edged instrument—that inflicts irreversible pangs. After the cauldron has tipped over and the skulls and guts pour forth, scattering every living being from a scalding death, you almost wish you could have let things lie.

Director Paolo Sorrentino endeavors on a difficult task taking on a living subject. Nobody likes dirty laundry spread out for everyone to see, but the stench and many folks’ ill-begotten ways are aired, and deservedly so. It was reported that the filmmaker couldn’t secure financing for the film for fear of reprisals. Big surprise. Luckily his sound eye and smooth touch delivers a most infallible result that will garner bottomless dividend. For the greater good the film does justice to the man that probably deserves a far more devastating depiction. We’re talking about a monster (his favorite flick is Dr. Jekyll and Mr. Hyde ) who has ordered hit after hit yet never pulled the trigger on his own, all the while hiding behind a faith in God.

The slippery ruler managed to steer clear of incarceration and still punches chads and raises his hand to ay and nay. He once quoted, “You always find the culprit in crime novels. But not always in real life.” Maybe this film is not so much an interpretation but the one chance to show the identity of the culprit is by a fusillade of evidence, even though the ending would never fly in Hollywood. The director made all attempts to provide the viewer—in substance a mock jury—to cast down a verdict that will stick (this time). Film can be an instrument beyond the art form, as well as pure entertainment. If Il Divo teaches us anything it shows that film can play the 13th juror and at times be the ultimate emblem of truth.