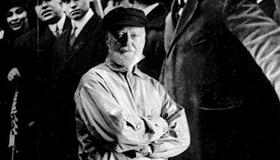 Documentary about San Francisco Institution, Poet and founder of the long-standing and fiercely independent publisher and bookseller City Lights, is utilitarian in the ideal. Scratched photos and pockets of poor sound only support the film’s sincerity. Truly, the authenticity of this doc, by photographer and filmmaker Christopher Felver, sweeps you off your feet. Film should appeal to fans of the Beats, poetry, political activism and Culture (with a capital “C”) who hail from cities international. Doc will open in San Francisco but could be hugely successful in cultural centers and abroad. Theatres hoping to distribute would do well to work with local bookstores and coffeehouses to raise attention. A future in educational markets seems likely.

The “Mayor of North Beach” who is “waiting for someone to really discover America” rejects being described as a “Beat.” He did begin his life in San Francisco as Writer/Publisher/Bookseller before Kerouac, Ginsberg and Corso made it to the scene. Repeatedly we hear Ferlinghetti recite the work of his fallen compatriot poets, which paints him as something of a father figure, a veteran and conscientious objector to the movement with which he’s so famously aligned. But categories are flexible here, and possibly even superfluous.

The poetry of the ’50s and ’60s, Beat or otherwise, enjoyed a great and reciprocal relationship with the ongoing work of visual artists—an exchange so fluid poets often refer to themselves as painters and painters as poets. Ferlinghetti, who paints as well as writes, never steps far from his influences, but says “there isn’t an “Away” anymore” because American culture and capitalism is everywhere—suggesting, of course, that the greats of earlier eras could not exist today. Gauguin could go to Tahitibut he’d find a Club Med. All categories aside, authority is the universal issue in the crosshairs of this artist. Enchanting passages of Ferlinghetti reading his work (as well as the work of others) are directed like montages, and resemble short music/poetry videos.

Reading out loud, which could be seen at Happenings, Slams and plain old Poetry Readings, was a revolutionary act and a reaction to the censorial restrictions put upon the publishers participating in the Quality Paperback Revolution. As such, it was a major part of the cultural zeitgeist of the Beats. The Quality Paperback Revolution was immediately opposed to the aristocratic model of hardback publishing and prestige bookselling common during the prominence of T.S. Elliot. Quality Paperbacks were pocket-sized artworks aimed for sale on the boulevard. The infamous censorship trial concerning Allan Ginsberg’s Howl (which determined the poem had artistic merit and was therefore not smut), had a major effect on the Beat and Paperback movements, and their appearance to the public—the 4-page spread in Life Magazine drawing attention to Howl ’s publisher/bookseller Ferlinghetti didn’t hurt.

The Beats, as a movement, were themselves an influence in the changing tide of counter culture across the country. Yet, Ferlinghetti is prophetic as he quotes Marcuse who spoke of “the enormous capacity of a dominant culture to ingest its most dissonant elements.” The counter culture, Ferlinghetti says, was ingested. It’s at this point that the doc becomes a momentarily sad and elegiac poem to the end of revolution and the mortality of its subject. As the film draws to a close we see different institutions honoring the poet. He’s given a medal by the French, a plaque by the Italians, a Robert Frost Award, a street by The City of San Francisco—his influence is official, and with that officiousness there is the implication his fecund period is behind him. While you can’t spell revolution without evolution, a condition that necessarily points to (as T.S. Elliott said) an “ending with a whimper,” Ferlinghetti calmly intones: “I may have been swallowed but I haven’t been digested. I’m indigestible.”