close
A movie about (re)capturing lighting in a bottle 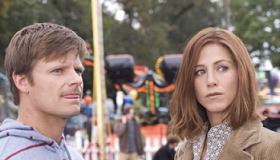 Mike Cranshaw (Steve Zahn) is like one of those dogs you read about who got lost during the family vacation and braved 1,000 miles of road and snow to make it back home. But in Stephen Belber’s overcooked, but tasty, amuse-bouche, Mike is not criss-crossing the nation like a Grateful Dead groupie to find his home. He’s hopping from Arizona to Maryland to Washington state to find Sue (Jennifer Aniston), a corporate art dealer who stole his heart during an overnight stay at his parent’s Arizona motel. Belber’s directing debut really clicks when Mike and Sue circle each other in deep consideration; their flaws as individuals defining them—yet, if they got together, those flaws would cancel themselves out. Unfortunately, audiences are rarely interested in Aniston when she goes indie (a shame, because she’s smart to do it), so ticket totals will be on the low side for her and for movies of this type.

Romantic comedies may be targeted towards the ladies, what with the dumping and the crying and the moist declarations of love, but when it comes to relationships, men are the weaker sex. When they get attached, they’ll do anything. When they break up, they’ll blubber like a schoolgirl. Sure, some men are dogs. But Mike is a puppy.

To call Kingman, Arizona a dead end town is an insult to the dead. Mike’s Vietnam vet father (Fred Ward, we always like Fred Ward) and ill mother (Margo Martindale) run The Kingman Motor Inn, a dusty and lonely stop between here and there. Mike lives in a room at the motel and serves as its Night Manager. In all his 38 years, he’s never left Kingman, Arizona and how can he when there’s an overflowing toilet in room 11O? When Sue arrives, with her severe business suit and curt demeanor, Mike is beyond smitten. She is his ticket out of Nowheresville, but his attraction is not calculated. Mike is awkward and without game, but he runs on instinct and spontaneity. That night he grabs a forgotten bottle of wine and gives it to Sue as a gift, compliments of management. The next night he brings her a complimentary bottle of champagne and, sensing his emerging crush (and seizing a chance to momentarily escape her loneliness), she lets him put his hand on her behind if he’ll then disappear. Sex in the motel laundry room follows, right before she drives away.

An odd bit of alchemy in many relationships is how you absorb the best of your partner, who then learns to love (or accept) the worst in you. Mike sees things in Sue that she doesn’t see in herself and it fascinates him. Leaving Kingman for the first time ever, he buys a one-way ticket to Maryland. She’s horrified to see him materialize at her workplace, but she soon takes him to soccer practice and includes him in her cherished charity practice of passing out Burger King coupons to homeless people. Since romantic comedies must keep the two main characters apart, Sue eventually escapes to Aberdeen, Washington to reconnect with ex-boyfriend Jango (Woody Harrelson), a punker turned yogurt baron. Because you can’t keep a good stalker down, Mike travels by bus to Washington and gets a job at a Chinese restaurant. With restaurant employee and new friend Al (James Liao) in tow, Mike grabs his hoodie and his binoculars and starts casing out Jango’s palatial estate. Which is where the problems begin.

If the success of Little Miss Sunshine taught us anything it’s that not every film can be Little Miss Sunshine. The 2006 Oscar winner is the torchbearer of a mini-genre that combines a street cred cast, quirky sincerity and a dash of edge and heats them under the Park City lights. It’s becoming its own cliché.

Management succumbs to these tendencies, and it’s the worse for it. How else to react to Mike skydiving right into Jango’s backyard pool in search of Sue, who now runs Jango’s charity operation? It’s a credit to Zahn, adding vulnerability and longing to his goofball personae, that the movie doesn’t feel as if it’s firing blindly in search of the right tone. Then again, don’t ask what Mike is doing in a Buddhist monk’s outfit late in the film. Yes, Sue’s dad lived in an ashram and Mike does yoga, but whether out of obligation to genre or distrust in his screenplay’s more sober aspects, Belber’s excursions into broad laughs and pleasant absurdities are disappointing. The characters cover a lot of ground, but the movie is better when it stands still. And Aniston’s willingness to be still, to go small when the emotion could have called for big, continues to impress. She and Zahn make a good team, even when the coach is calling the wrong plays. In a sense, Sue’s reaction to Mike mirrors our reaction to Management : it’s doing so much to turn us away, yet we stick with it, hoping to recapture the magic of when we first met. That never quite happens, but it never quite matters.