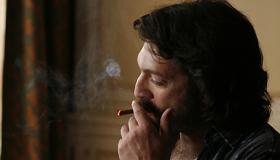 A double-barreled, hard-boiled homage to the proud legacy of both French and American gangster films, director Jean-Francois Richet’s feverishly-paced two-part biopic Mesrine is, like its subject, just a tad too obsessed with its own importance to ever really achieve lasting greatness. It is, however, exceptionally good on its own terms, a fascinating—if somewhat jarringly constructed—commentary on the amorality of ambition and the thin line separating celebrity from infamy. Crossover appeal among Francophiles and artfilm devotees on the one hand and crime film aficionados on the other could translate into considerable Autumnal coin.

A classic case of truth trumping fiction, the story of Jacques Mesrine (pronounced “May-reen”) unspools a bit like Barry Lyndon as re-imagined by Brian De Palma, a restless character study in which an otherwise unremarkable individual, tossed by the tides of fate, emerges unexpectedly as remarkable, but in all the wrong ways. Flashing back (as such films often do), from the moment of his demise to a more linear telling of the major beats of his life, the picture follows Mesrine (Vincent Cassel) from the dog days of military service in war-torn Algeria of the late ’50s back to France where he channels his penchant for brutality into service for a local crime boss (Gérard Depardieu). Soon thereafter he brings home a Spanish wife (Elena Anaya) and begins a family, only to see his illusion of domesticity shattered when a crucial misstep lands him in prison.

Struggling and failing to go straight after his release, Mesrine tumbles back into his old ways, but with a newfound recklessness that verges on the self-destructive. Abandoned by his wife, he takes up with a new lady luck—the nihilistic Jeanne Schneider (Cécile de France) —who is only too eager to play Bonnie to his Clyde. The French media eat it up, as does a public increasingly fascinated by the duo’s shameless bravado. Escaping capture in France, the fugitives eventually take refuge in Quebec where a partnership with militant separatist Jean-Paul Mercier (Roy Dupuis) precipitates a new North American crime spree.

By the time authorities finally catch up with them, Mesrine is in chrysalis. The common thug prison once nearly tamed is no more, displaced by a nascent egomaniac for whom the quest for fame and celebrity have become all-encompassing. A sentence in Canada’s highest security prison is a gift, an opportunity for even greater glory on the way to enduring infamy. What most impresses about Mesrine’s eventual breakout, in fact, is not the meticulousness of the planning or even the fact that it succeeds, but the showmanship with which he and his co-conspirators execute it. From here on out, everything in Mesrine’s life is theatre.

For Richet and co-screenwriter Abdel Raouf Dafri, this is the key transitional moment of the narrative—the very instant when Mesrine, for better or worse, found himself and discovered a sense of purpose. As the second film begins, the ellipsis is jarring—Mesrine is, inexplicably, back in France and again in the headlines, more brazen than ever. Taunting authorities and flaunting his spoils, he behaves as if he were untouchable—and increasingly, the press and the public begin to believe so, too.

Ironically, as Mesrine’s egomania swells, his ability to engage accomplices wanes. The more his antics verge on the absurd and irrational, the less those closest to him—his new lover Sylvia (Ludivine Sagnier) and partner Francois Besse (Mathieu Amalric)—seem to have the stomach for it. The end is nearing, and it will not transpire gracefully.

This isn’t the first time the movies have attempted to tackle the story of Mesrine—but unlike previous documentaries and a rather sloppy 1984 film starring Nicolas Silberg, it is the first one that genuinely captures the essence of the man and the societal schizophrenia that fostered his myth. It’s also a gargantuan leap forward for director Richet, whose most noteworthy previous accomplishment was the mediocre 2005 remake of John Carpenter’s Assault on Precinct 13. But like so many of his countrymen past and present, Richet has translated middling Hollywood success into a triumphant homeland return. Dividing the story into two parts is a particularly savvy move, for it enables Richet and Dafri to underline the Faustian impulse at the heart of Mesrine’s tragic trajectory. Unlike Soderbergh’s misbegotten Ché, which seemed to only belabor the point of the first film in the second, Mesrine demands to be seen in two parts precisely because Mesrine’s life transpired in two parts.

This isn’t to suggest that Richet’s direction is flawless—far from it. Through much of the film he is clearly at pains to wrap his arms around the totality of Mesrine’s enormously eventful life, trying desperately to squeeze as much as possible into a film that simply cannot accommodate it. Several sequences in particular are so haphazardly assembled, so lacking in any sense of pacing, thematic cohesion or editorial elegance that they almost bring the film to a grinding halt. But Richet has always been better at minutiae, and it is the minutiae in Mesrine that engenders its very best moments. The staging and execution of his most notorious crimes, his legendary escapes and, in particular, the final hours of his life—the magnificent moment that bookends the movie—are pure cinema.

In a very general sense, it seems clear that Richet means to tip his hat to the likes of Scorsese and Coppola as much as to that revered pater familias of French cinematic gangsterism, Jean-Pierre Melville. But there are other influences here, too— Rififi, Get Carter and even Sergio Leone’s Once Upon a Time in America —that suggest a love affair not just with the crime film genre but with the theatricality of crime itself, the very moral ambivalence that lies at the heart of the genre’s dramatic power—and which Mesrine so brilliantly exploited.

All of this would be for naught, of course, if not for Vincent Cassel’s absolutely staggering lead performance, easily the best of his career and quite possibly the best male performance of 2009. Perhaps because Mesrine saw himself as heir to a proud lineage of historic outlaws, Cassel’s performance likewise borrows liberally from such famous screen outlaws as Clyde Barrow, Tony Montana and Jesse James. But the single most crucial touchstone for both Mesrine and Cassel is the 19th Century French rogue whose life Mesrine’s most closely resembled, legendary ne’er-do-well Pierre-François Lacenaire, most famously popularized in such films as Les Enfants du Paradis and the 1990 Daniel Auteuil starrer Lacenaire as well as Dostoyevsky’s Crime and Punishment, which he reportedly inspired. Like his equally notorious forbear, Mesrine saw himself as a kind of artist, an orchestrator of chaos, a master of mayhem. Both were uncommon criminals with more aspiration to glory than gain, deluded by misbegotten grandeur, undone by arrogance. Though the film gives more than cursory attention to the lawman who would eventually bring him down—the unmistakably goateed Commissaire Broussard (Oliver Gourmet)—it is only in Mesrine’s mind that their rivalry rises to comic book proportions, the penultimate conceit of a man unable to comprehend that attaining the highest rung has brought him to the end of his rope.

All other technical contributions are beyond reproach—Robert Ganz’ sizzling, energetic photography, Virginie Montel’s costuming and Emile Ghigo’s superior production design all seamlessly orchestrated to create a flawless sense of time and place as the picture bullies its way through two of the most eventful, tumultuous decades in French history.

If Richet’s magnificently flawed opus gains any traction with American audiences—few of whom have likely ever heard of Mesrine—it will be thanks to the sheer energy he pours into the effort. Though far from perfect, its intermittent flirtation with perfection is a joy to behold, a testimony to the kind of risk-taking that has long separated the best European films from Hollywood’s stock and trade. That alone should make Mesrine a must-see.