close
Insatiable genre fans will enjoy Mutant Chronicles; everyone else will stay away 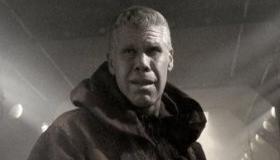 With a modest production bringing 23rd Century Earth to shadowy life and a scattered script inspired by the popular role-playing game and its numerous offshoots, Mutant Chronicles, from the Magnet label of Magnolia Pictures, looks to attract a small cultish audience of genre die hards via a limited theatrical release with slightly larger audiences expected via VOD and home video. While Perlman supplies genre credibility, thanks to his performances in the fan favorite Hellboy movies, shoestring special effects and flimsy storytelling make Mutant Chronicles a B-movie fantasy in search of an old Times Square moviehouse.

When Constantine, the chief of humankind (John Malkovich), announces plans to evacuate Earth after an ancient capsule releases an army of flesh-eating mutants, Brother Samuel (Ron Perlman), a fighting monk and something of a prophet, convinces the dying leader to give him and a small band of soldiers one last chance to destroy a 10,000 year-old machine responsible for the mutant menace. The climactic surprise is the secret the freedom fighters uncover about the mutants.

Mutant Chronicles post-apocalyptic setting and mutant nemeses draw comparisons to popular sci-fi franchises Resident Evil and Alien, but Mutant Chronicles lacks the visual luster and standout monsters of those popular films. Simon Hunter, who also directed the straight-to-video thriller Dead of Night, fails to build consistent suspense from the non-stop splatter. While its tale of future mankind fighting for its survival against monsters is timeless and the film's steam-punk sets are appealing, writer Philip Eisner never builds upon this oft-repeated premise.

Ron Perlman is as likable as ever as Brother Samuel, delivering the type of gruff performance his fans have come to expect. Thomas Jane remains a stiff action hero, complete with a cigarette dangling from his lips, offering little beyond his chiseled good looks. The most interesting performance belongs to Anna Walton, who brings welcome sword fighting action to the monster mash as a silent female monk.

Mutant Chronicles ' greatest asset may be its profile as a popular game, although its fan base is small compared to popular video games Halo, Resident Evil and World of Warcraft. While its chances at theatrical success are slim, especially with high-profile Hollywood fantasies just around the corner, Mutant Chronicles will likely connect with its fans on home video and VOD. For Hunter, who's becoming as well known as a genre filmmaker as he is for his commercial work, Mutant Chronicles remains the next calling card towards a big budget production.