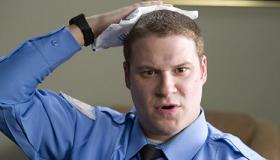 The dark comedy Observe and Report is the equivalent of a finger down the throat, a nightstick to the noggin, or a taser to the crotch. If it were funnier or remotely well made, you could take the beat down in stride, but writer/director Jody Hill has located the dark and mislaid the comedy, turning star Seth Rogen into a psychotic Barney Fife. Observe and Report may turn out to be the antithesis of Paul Blart: Mall Cop in an unintended sense. Any word of mouth is likely to dampen its performance since even enthusiasts will have to caution potential ticket-buyers about its belligerent nature.

Some viewers will appreciate how Hill flirts with taking the premise to its logical and more-realistic-than-usual conclusion. As in The Foot Fist Way, he creates a truly odious protagonist and then gestures at evoking sympathy for him. Hill and company might deny caring whether the audience cares about Ronnie Barnhardt, head of security at the Forest Ridge Mall. They might claim their goal was to push the envelope and offer an irredeemable character who would challenge audience expectations. Fine. That still doesn’t make the harsh movie worth enduring. Nor does it explain hints that Observe and Report wants to be trenchant about American mall culture and society-at-large. The conversion from crudeness to anything more insightful or genre-busting never takes place because neither the screenplay nor its execution is good enough to rise to the level of satire. Hill and company don’t skewer or celebrate fast-walkers, obese food-court habitués, sluts, racists, gun lovers, or corrupt cops. Unlike Borat, a kindred if sublimely funny film, there are no layers or subtext, no depth to the humor or plot. Observe and Report is a one-trick pony.

Ronnie, the miniature equine in question, is bi-polar and dangerously delusional. His foils on the retail force are rotund Asian twins (John and Matt Yuan), while Michael Peña plays his lisping Latin sidekick. When Brandi (Anna Faris), a floozy from behind the cosmetics counter, is flashed by a parking-lot perv, Ronnie makes his move on both law enforcement and romantic fronts. In the process, he locks horn with Ray Liotta’s Detective Harrison and applies to join the police force. Nemesis Saddamn (Aziz Ansari) and a born again virgin who sells sticky buns (Amy Adams look-alike Collette Wolfe) fill out his workplace universe. At home, his boozy mother (Celia Weston) offers backhanded encouragement. Adept at nonsensical confrontation, Ronnie is a hateful mind of misinformation, well past being pathetic.

Rogen is everywhere these days and seeing him in a mall is hardly jarring (just as Kevin James, a superior physical comedian, also fit). News flash: not everything that comes out of his mouth is funny. Yes, the movie contains a few humorous one-liners and exchanges, but the ratio of zingers to boners is 1:5. My take-away images are Ronnie screwing Brandi when she’s passed out on a vomit-strewn pillow and Ronnie’s bloodied and battered face, courtesy of the cops. Others may fixate on the full frontal flasher. Observe and Report isn’t a few notches away from PG-13; it’s borderline NC-17. But the nudity, violence, profanity, drug and alcohol binges, or politically incorrect digs at the mentally and physically challenged could be swallowed if they made you guffaw more or if they were successfully ironic and thus deployed for some higher comedic purpose. There’s no flow to the strung-together tirades and the production falls between the cheapo independent and big-budget studio stools. Hill’s habit of blasting heavy metal music is obnoxious. Overall, you get the impression that the movie was artificially amped-up somewhere along the line. Perhaps when Paul Blart passed the $100 million mark or after negative feedback during test screenings.

I can imagine Hill, who cites Taxi Driver as his inspiration for Observe and Report, feeding off negative responses. He thinks it’s inane to depict people like Ronnie as innocuous when they’re actually disgusting human hazards. Yet he relishes daring the audience to identify with them. Maybe if Danny McBride, the star of The Foot Fist Way and the HBO series East Bound and Down who has a cameo here, were playing Ronnie it would be easier to love/hate him. With Rogen in the part, the snarky distance or off-putting edge necessary for that to happen is missing. Turns out, he’s not as cuddly as Kevin James, as bravely insane as Sacha Baron Cohen, or as juvenile as Adam Sandler. A colleague of Detective Harrison hides in his office closet to overhear Harrison break some bad news to Ronnie. In the middle of the scene, he emerges to declare, “I thought this was going to be funny. But it’s actually kind of sad.” That sums up Observe and Report.