close
A better catfight you’re not likely to find 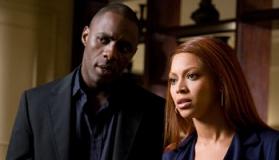 Meow! If you're looking for a catfight, you can't do better than Beyoncé Knowles on Ali Larter—two gorgeous, strong women glowering their way through Steve Shill's glorious wedge of cheesecake. By any measure, this melodrama about a wife defending her husband from a blonde sex predator isn't a good movie; however, when Beyoncé finally socks her rival in the jaw, the medium-sized audiences willing to pony up for good, clean trash will burst into the sort of applause usually reserved for greatness.

The characters in David Loughery's script are as archetypal as silent movie heroes and villains. On the side of evil is Larter's delusional office temp, or "temp tress," as money manager Jerry O'Connell dubs her on her first day on the job (this is what passes for foreshadowing in Loughery's world—either he's delusional himself, or a tongue-in-cheek genius like R. Kelly). On the side of righteousness are Beyoncé's lioness wife and husband Idris Elba, a wealthy family man as square-jawed and upstanding as Dudley Do-Right. In the ’80s, the men in love triangle thrillers were allowed to fool around at least a little, but Elba never so much as feels up Larter's Wonderbra; the one time the vixen straps him on for a ride, she's had to lace his cocktail with roofies.

Shades of gray? Moral ambiguity? Who needs 'em, says Shill's popcorn-tossing romp. Obsessed traffics in catharsis—we aren't here to learn about the human condition, we just want to watch Beyoncé tromp a tramp. Shill is so convinced of the joy of his simple set up, he layers Larter's every move with music ripped from Halloween. Larter accosting Elba in lacy granny panties and fishnets is scored with the hysterical violins of violence—if only she'd topped her outfit with a hockey mask.

In her earlier scenes as the world's best office temp, Larter's desperate secretary gives off an air of forced bravado. She's good at what she does, and we're wary of her calculating brilliance. After Elba rejects her for the third time, she charges headlong off the rails. Was she always nuts? Has she done this before? Shill spares us the daddy issues flashback—by the time the film ends, we know nothing more of her roots besdies that her blonde is perked up a notch with bleach. The film is so deadpan that we're never sure if these are deliberate filmmaker omissions or lazy audience underestimations. I'd love to credit Shill with the former, however no one involved seemed to notice that in one scene, Elba says he's an Aquarius, but then later celebrates his birthday in March. Hey, so Obsessed isn't going to win any kudos from the Academy, or even the phone psychics union. There's still few places I'd rather be than in a packed movie house for this film's outrageously tabloid-pop climax.