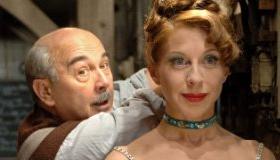 An audience-friendly plot about a group of French theatre managers and performers determined to save their neighborhood music hall is told with lush period production values that bring 1936 Paris alive. This and the bonus of a pretty female lead, Nora Arnezeder, give Paris 36 ( Faubourg 36 ) director Christophe Barratier a film picture-perfect for U.S. adult arthouse patrons who seek out sentimental, foreign-language fare. For Barratier, who scored with U.S. specialty audiences via his previous film, the equally sentimental The Chorus ( Les Choristes ), Paris 36 looks to exceed that film's $3.6 million domestic total when Sony Classics releases it in April 2009.

Newcomer Arnezeder looks stunning in her period wardrobe and sings beautifully as the young performer Douce. She's also surrounded by a likable ensemble of colorful colleagues, Gérard Jugnot as Pigoil the stagehand, Clovis Cornillac as the theatre's electrician and Kad Merad as the comedian Jacky. Both Jugnot and Merad worked with Barratier on The Chorus.

Barratier and Julien Rappeneau adapt a previous story idea by lyricist Frank Thomas, Jean-Michel Derenne and composer Reinhardt Wagner into a feel-good drama and upbeat musical despite its financial crisis setting and the desperate lives of its stage hall protagonists.

While Paris 36 may be too sweet and nostalgic to rank high on many critics' lists, Barratier's optimistic storytelling should generate strong word-of-mouth from audiences who remember watching and liking The Chorus.

When their employer loses control of his music hall, The Chansonia, to the local mobster, theatre workers and friends Pigoil (Jugnot), his son Jojo (Maxence Perrin), Milou (Cornillac) and Jacky (Merad) decide to stage a cabaret and bring their beloved theatre back to life. It's 1936 and times are tough in Paris but the optimism of the French Popular Front and the Socialist Party make these workers believe anything is possible. Lucky for them, a pretty young singer (Arnezeder) comes to their auditions.

In its final moments, once The Chansonia has become the hit theatre of Paris and elaborate musical numbers from Thomas and Wagner take hold, Barratier shows why comparisons to René Clair are fair and accurate. Barratier's skill lies in upbeat stories like Paris 36.

Production values are exquisite thanks to the work of production manager Françoise Hamel, costumer Carine Sarfati and set designer Jean Rabasse, who built an entire theatre on a Prague soundstage for the film. Cinematographer Tom Stern, best known for his work with Clint Eastwood, makes beautiful use of the elaborate set as well as Parisian street life and captures the full energy of the songs and performances.

These strengths offset Paris 36 's overly sugary plot, something that will deter young arthouse moviegoers and lack of recognizable names to U.S. audiences.

For Barratier, who only directs his third feature with Paris 36, it's clear that he has found his niche, one that won't please critics who prefer grit instead of nostalgia, but will continue to please audiences.