close
Fun (and horror) with words! 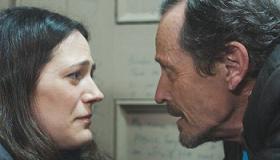 At the start, Pontypool, written by Tony Burgess and adapted from his novel Pontypool Changes Everything, looks like it might be a kind of down-market twist on Eric Bogosian's Talk Radio. Grant Mazzy (Stephen McHattie) is driving through the snowy Ontario darkness listening to himself on the radio; Grant’s chatter about Mrs. French's missing cat, Honey highlights just how tiny the town of Pontypool is. Arriving at work in time to go on live for the morning commute, it does not appear as if the discourse will get much better—a collection of announcements of snow day school closures and joshing with off-screen traffic reporter Ken Loney (Rick Roberts) who is monitoring the roads from "The Sunshine Chopper." But Grant keeps getting off topic, trying to incite his listeners to some kind of reaction, to the consternation of his producer Sydney (Lisa Houle), who warns him, "People are just going to think you're a dick."

Not that Grant cares. The one thing that’s evident from the start of Pontypool is that Grant was once a very big deal and has somehow fallen to this. But this morning, increasingly odd reports are coming in from the outside. Sydney initially dismisses the odd calls as bogus, until Ken calls in with a report of a mob surrounding Dr. John Mendez's (Hrant Alianak) office. From there, the news and rumors only get more and more bizarre with tales of multiple fatalities, suicides, murders, military intervention, Quebecois separatists and a quarantine. An emergency order goes out, "Avoid close family members, terms of endearment, rhetorical discourse."
In the cocoon of the station, it all seems unreal to Grant, Sydney and engineer Laurel Ann (Georgina Reilly). But the horror eventually spills into the station, and worse, whatever is happening appears to have something to do with Grant's show, with the very words that he utters. Dr. Mendez drops by Grant's show with a theory: language turns against its users and they respond with manic violence, as mindless as any zombie. And crowds of these creatures are amassing outside the station.

McDonald keeps the gore to the minimum. Most of the horror lives off-screen, as he trusts the viewer's imagination to fill in the blanks. It is a strategy that keeps the suspense dialed up, even as Burgess' darkly witty story provides plenty of opportunity for laughs. It is also a wonderful showcase for McHattie, the longtime character actor most recently seen in A History of Violence and Shoot 'em Up. He completely embodies this cynical character that gradually and reluctantly transforms into the hero, a man addicted to the sound of his own voice who has to learn the value of silence. It is a wonderful star turn in an edgy and irresistible little movie.