close
Implausibly humanist Austrian crime film may deserve a merit badge, but not an Oscar 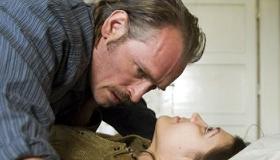 Götz Spielmann’s overpraised Austrian Oscar submission Revanche is a slight film masquerading as a significant one, and a work whose style and substance are irreconcilably at odds with each other. Shot using a cool and uninflected visual vernacular reminiscent of Michael Haneke’s Hidden, Spielmann’s deliberative humanist caper film tracks Alex, a sleazy but charismatic brothel worker (Johannes Krisch), and his Ukrainian prostitute girlfriend Tamara (Irina Potapenko) through the vile and dangerous Viennese nightworld as they hatch a desperate plot to escape an evil, lascivious and mob-connected boss.

A bank robbery ensues, but Bonnie and Clyde this pair is not. The screen has seldom contained such a reluctant, joyless and vaguely appalled outlaw couple, which makes it hard to believe in Alex and Tamara’s motives and actions; they’re just too blameless and golden-hearted to be doing the things they do. The clinical cinematography, which Haneke uses to deflect empathy from his characters, keeps viewers in the objective middle distance, a space where a master like Haneke expects them to come to their own conclusions and think their own thoughts. But Spielmann is a rank sentimentalist—a puppeteer of emotionalism, bent on giving us unlikely Jean Renoir-like creations who quiver with simple human dignity and plaster-cast sanctimony, irrespective of their dire station or their social context.

Despite a justifiably celebrated performance by the charismatic Krisch, Alex and Tamara simply don’t play true to the rather believably delineated criminal underworld they’ve been asked to inhabit. There’s the inkling of an exposé of the appalling conditions for Europe’s many Slavic sex workers, but the social issues raised are quickly disposed of in favor of quieter, more redemptive and far more familiar plot-points. Tragedy strikes, and Alex’s life becomes entwined with that of a childless policeman (the improbably named Andreas Lust) and his frustrated wife (Ursula Strauss) in a series of developments audiences may find either deeply moving or shallow and manipulative, depending on personal taste.

The only way Revanche will have much of a future in America is if it’s nominated for a Foreign-language Oscar, thereby providing a direct neural pathway to the same audiences that flocked to the similarly-themed but vastly more intricate Crash a few years back. It’s debatable even then how much of a chord Spielmann can strike by providing so much maudlin emotion using such dry and rigorous visuals, and so treacly a view of human nature that is so at odds with all the sleaze on display.