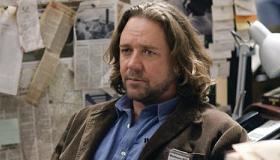 The paranoid conspiracy thriller that fed our fears and occasionally soothed our national psyche in the 1970s gets a crisp and satisfying workout in the new film from director Kevin Macdonald ( The Last King of Scotland ). Russell Crowe does everyone a favor by replacing original top-liner Brad Pitt and delivering a performance of grizzled credibility as a newspaper journalist investigating the death of a woman whose political ties extend far beyond the married congressman she’s sleeping with. While the movie is better than expected, Crowe is coming off the disappointing Body of Lies and co-star Ben Affleck is hardly an audience magnet. Figure decent box office numbers, which is too bad because the movie deserves better returns.

State of Play is a 127-minute distillation of a 6-hour BBC nail-biter from 2003. Wrestling the material down to multiplex length is a trifecta of talented screenwriters, including current do-no-wrong writer/director Tony Gilroy ( Duplicity ) and fellow hyphenate Billy Ray (the excellent Breach ). Their screenplay, both brisk and brusque, makes two grand plays, but the one that sticks is not the one you’d expect. The central mystery is who killed Sonia Baker (Maria Thayer), aid to young congressman Stephen Collins (Affleck). Investigating for the Washington Globe newspaper is Cal McAffrey (Crowe), a vintage, ink-stained wretch whose beat-up Saab is filled with empty junk food packages and whose scraggly hair and middle-aged paunch suggest someone willing to forgo showers and nutrition for a story. When it’s discovered that the married Collins was having an affair with Baker, the congressman turns to former college roommate Cal for help. Cal is then forced to play both sides, wanting to rescue his old friend, yet also needing information to write the hot story for which Page One is being held. Complicating matters is that Cal once had an affair with Collins’ wife, Anne (Robin Wright Penn, squeezing good mileage from a nothing role), an important connection in the BBC version, but half-realized here.

In this era of disappearing newspapers, it’s depressingly quaint to see the old-school trappings of the city desk, the rows of cubicles piled high with late editions of yore, the overhead fluorescents and the sense of The Truth being compiled and committed to wood pulp. But as the story expands to include a swipe at Blackwater-style private security corporations, the real story is how Macdonald has fashioned a resigned, hopeful handoff from conventional journalism to the journalistically quasi-legitimate world of blogging. The Globe’s resident political blogger is Della (Rachel McAdams). Prim and eager with “dewy, cub reporter eyes”, Della has the energy of youth, but none of the worn-out shoe leather that turns a professional googler into an investigative reporter. A running undercurrent is how Cal, along with Katharine Graham-style Globe editor Cameron Lynne (Helen Mirren) know they’re a dying breed. Cameron fights against the “sinking of this bloody newspaper” now that its new corporate overlords are more interested in profit than news. Cal’s attitude towards Della and what she represents is more proactive and helpful. He becomes her mentor and, as he literally descends into the sewers for a scoop, she learns how to hit the pavement, getting doors slammed in her face and trading two dates with a skeevy guy for a scrap of information.

While the long shadows, overhead angles and propulsive score create a nostalgic Cold War tenseness, the seed of paranoia the film is planting never remotely takes root. Collins, as it turns out, was fighting against the interests of PointCorp, a Big Bad Corporation with an eye on privatizing homeland security. With offices in (where else?) the Watergate Hotel, the high-priced mercenaries of PointCorp feast on the “Muslim gold rush” of the terrorist era. But paranoid thrillers work best when there’s something realistic to be paranoid about. The movie makes a better, if floridly argued, case for the evils of corporations than the imminent rechristening of America as the United States of Blackwater. But State of Play is, more than a topical alarm bell, an efficient, pulsating exercise in thriller mechanics. The movie would only be half as good without Crowe, his sartorial (lack of) style and simmering attitude extracted from the DNA of All the President’s Men. Affleck, poor Affleck, has long been searching for a seat at the adult’s table but he’s too old to be the young whippersnapper congressman and too young to command much authority. It’s also possible, if not more likely, that he’s just not a very strong actor. The supporting cast is expert, with special honors going to Jason Bateman, skuzzy and funny as a DC public relations maven with knowledge of how Sonia Baker ended up in Collins’ employ.

In crafting this old fashioned, professionally executed thriller, Macdonald and company show confidence that the web journalists entrusted to break the next Watergate may be unseasoned and naive, but with a few baptisms by (gun)fire, they can be made to respect the public trust they now hold. Let’s hope so. Because there’s a nobility to the Cal’s of the world, the heroically disheveled reporters who live for the hunt and who can buy a quote with a hot cup of Joe. Political bloggers are still, as Cameron puts it, “hungry, cheap (and able to) churn out copy every hour.” She’s bitter, but that’s what happens when the asteroid is coming and you’re the dinosaur.