close
A costly lesson for all involved

That Game of Chess 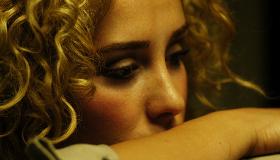 Sometimes a movie is so amateurish, you don’t know whether to hate it or feel sorry for it. That Game of Chess, a Bollywood crossover co-written by and starring Viresh Sinha, falls into the latter category, if only for the sincerity of purpose beneath its horrid dialogue and simplistic visuals. Sinha reportedly spent his life savings telling the story of an Indian who immigrates to America to pursue his dreams. But with these results, Sinha would have gotten better returns investing with Bernie Madoff. At least it’s destined to disappear so quickly it won’t set back the stateside Bollywood movement, which is still more promise than reality despite the Oscar winning success of Slumdog Millionaire.

Not one to aim low, Sinha’s inspiration is the teachings of Mahatma Gandhi, which are invoked in contemporary New Delhi when young Rahul (Sinha) tells his father (Bollywood veteran Alok Nath) that he’s moving to America. Rahul’s father, like Gandhi’s mother, makes his son promise to avoid drugs, women and alcohol while on his overseas adventure (although Rahul negotiates a compromise allowing him to drink “only socially,” which apparently means he can’t become a professional alcoholic). Fresh off the boat, Rahul gets a job as a computer programmer where he shares Indian food with his co-workers and fixes their PCs, earning him the ultimate American reward: a hot, white chick. Although Rahul’s relationship with Sarah (Melanie Malia) starts well, cultural differences abound and soon he’s sinking into jealousy after seeing her dance with another guy at a party. Before long, he’s hitting the bottle and doing cocaine on the table of a local bar in sight of everyone, which Sinha and director Raja Bundela don’t seem to realize is fantastically illegal, yet no one stops him. Actually, that’s not true. Rahul is approached, in plain sight, with even better cocaine (“not that Mexican crap”) by gorgeous hooker Elena (Cazzy Golomb). She’s a smart and kindly prostitute who quotes Gandhi and is suffering through the same crisis of identity as Rahul. Only the best kind of bad movie can get a big laugh when its female lead confides that her parents died in a plane crash, but Sinha pulls it off. Indeed, the New Dehli-born writer has a grand knack for terrible dialogue. Rahul’s boss, who “runs a tight ship, but has an open door policy” boldly proclaims, “time is money, people!” not once, but twice. Such is Sinha’s concept of America, a place where business-crucial values like punctuality (“you know how important that is to us”) are paramount concerns. But (get ready to be surprised) America is also filled with corrupting, anti-Gandhian influences that can wash away the goodness and purity of unsuspecting immigrants like Rahul. Sinha’s final answer is to transport as much of India to Rahul’s living room as he believes is narratively believable, a move that won’t make the anti-immigrant lobby very happy.

While nothing could save the epic contrivances of Sinha’s script, director Bundela only compounds the issue. With all the style of a corporate sexual harassment video, Bundela shows little sense of where to put the camera and forgets that intimate conversations require close-ups of the participants. At one point, the b-side of a dissolve is a freeze frame, making a tender scene look like underground, homemade pornography. Later, a video transition is a cheesy swirl that the worst TBS sitcom wouldn’t attempt. And not to kick a movie when it’s down, but the music is awful, with romantic scenes set to sax solos and cues that end abruptly.

That Game of Chess makes two central arguments. The first, which is argued very well, is that audiences should avoid this movie. The second, which is argued a bit better, is the importance of immigrants retaining some cultural identity, lest they succumb to the flipside of the American promise. But instead of knocking America for having such readily available sins (what country doesn’t?), maybe people like Rahul should take the blame for not avoiding them. Either way, the film is just too silly for any serious discussion other than how Sinha plans to live now that’s blown his life savings on a movie this bad.