close
A plodding plot and a slow, talky escape 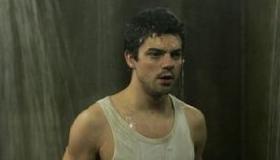 In order to see a critically ill daughter, a man serving a life sentence must suddenly team up a group of much younger inmates to plot a daring escape. A customarily fine performance by Brian Cox and a well-oiled supporting cast are not enough to lift this brutal and listless prison melodrama out of the ranks of a ’40s B movie. Audiences aren’t likely to make a break for this limited theatrical and on demand release, but DVD action could be more brisk down the line due to the talented thesps who overcome the stereotypical scripting to give their all.

Frank Perry (Brian Cox) is an aging “lifer” resigned to the fact he will never see the world outside of the prison yard. But when a letter arrives telling him his one and only daughter may be dying due to a drug overdose, the low-key guy suddenly springs into action and finds a renewed vigor to get his act together and seek redemption. To help him bust out he must enlist the services of a motley crop of younger inmates, Lenny (Joseph Fiennes), Brodie (Liam Cunningham) and Viv Baptista (Seu Jorge). Their escape plans are complicated by the new guy on the block, James Lacey (Dominic Cooper), who’s a distraction to Frank and a mirror of his younger self in many ways. Conflicts between these and others (including the evil, drug addicted Tony, well-played by Steven Macintosh) abound, turning The Escapist into a talky morality play that takes forever to get to its payoff.

It’s easy to see what attracted veteran actor Cox ( L.I.E. ) to this material as it presents a strong leading role for this fine character actor and a fully dimensional human being who must lift himself out of a humdrum, isolated existence and find a reason to live again. Cox is completely credible in the role, particularly impressive because much of the time he has limited dialogue. Only toward the end, when he gets his big speech to the Prison King (Damian Lewis), do we see the dignity and worth of this forgotten man come to the surface. Although the actors who surround him are all tops, including Fiennes and Cunningham, the rather pedantic and predictable characters they enact all seem like over-the-top stereotypes we’ve seen in a hundred prison pictures before. A lack of action for much of the proceedings doesn’t help their cause in engaging viewer interest.

First time feature director Rupert Wyatt co-wrote the screenplay with Daniel Hardy and fails to get a handle on what he’s trying to say, taking way too long to get to whatever point there is. Basically he employs a European approach to the details of the escape, cutting back and forth in time between the planning and execution. The gambit doesn’t really work and he might have been well advised to study what a grittier director like John Sturges or Don Siegel might have brought to the same material. There’s something here. Wyatt simply fails to find it.