close
Inspired by so many out dated commercials 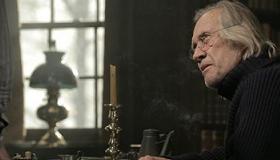 Ever wonder what the ancestors of The Gorton’s Fisherman were like? No? Well, it seems as though filmmaker Daniel Adams wants to impart that knowledge in The Golden Boys, a frozen fish stick of a movie about three retired sea captains seeking a housekeeper. The Romantic comedy sets the record for nautical nomenclature in a script not based on Moby Dick and will find its most receptive audiences in communities with a high concentration of retirees, which is why it’s opening in numerous Florida theaters along with a handful of other venues along the Eastern seaboard.

Taking place in 1905, this harmless serving of maritime malarkey may also boast the most liver spots on screen since Cocoon. David Carradine, Rip Torn and Bruce Dern play three buddies—Captains Zebulon Hedge, Jeremiah Burgess and Perez Ryder—living together in a Cape Cod fishing village. The old salts aren’t trailblazers when it comes to same-sex marriage, they cohabitate to save money and for the above-board companionship. While squabbling over inedible clam fritters and their untidy quarters in the first scene, they hit on an idea. If one of them gets married, they’ll gain a woman to tend house. The other two gentlemen can be borders.

They match coins for the dubious honor and Burgess, who’s been hitched twice before, loses. Since Craigslist has not yet been invented, an advertisement is placed in a periodical called The Nuptial Chime and lo and behold, Muriel Hemingway shows up in their parlor as Mrs. Martha Snow. (“We caught ourselves a halibut.”) Her first duty is to care for the boy’s ailing friend Captain Bartlett, portrayed by an extremely frail Charles Durning. The puritanical Bartlett and other religious-minded folk are in a tizzy about the liquor license that’s been granted to the town corrupter (John Savage, sounding more like a Brooklyn Mafioso than the guy in those old Pepperidge Farm commercials).

Inspired by Joseph C. Lincoln’s 1904 novel Cap’n Eri, this is a yarn in which every other character has a Biblical name. Along with nautical jargon, Adams’ script contains boatloads of quaint locutions: “Says I,” “We wuz at the depot.” ‘You wuz?”, “You fellers are enough to make a preacher cuss,” “He’s a darn fool Bedlamite.” A few anachronistic turns of phrase slip in as well. Those seeking a progressive feminist tract will be disappointed. The character of Widow Snow amounts to a 19th-century Stepford wife. She has nursing experience and ample stores of New England common sense, plus she’s a looker.

Unfortunately, Ms. Hemingway isn’t able to make the belabored dialogue sound as natural as her co-stars do. And yet, while everyone can admire their talents, the seasoned male trio will primarily appeal to those who remember them from their heydays, as opposed to from their more recent turns in Kill Bill, The Larry Sanders Show and Big Love. Choice roles don’t come along too often for older male actors and Messieurs Carradine, Torn and Dern take full advantage of the opportunity. Torn’s accent is the only glaring flaw. He starts out sounding like a Southerner—a dazed confederate General—but in later scenes attempts an Irish brogue. Don’t be surprised if this is Durning’s last appearance on screen; and stage legend Julie Harris has such a fleeting cameo she’s easily missed. As is common in such low-budget labors of love, the bit players overdo it.

Regarding the plotting, the story meanders, yet there’s little doubt where it’s headed. Adams’ attempt to add a climactic action scene founders completely and not even the efforts of his formidable leads can save it. Though it arrives without an MPAA rating, The Golden Boys is as clean as an expertly gutted scrod. Given the movie’s modest budget, the music is the only production weakness worth singling out. The soundtrack is over-scored and awfully loud, which is probably a concession to the hard-of-hearing senior citizens being targeted.