close
Philosophizing that amounts to far too little

The Limits of Control 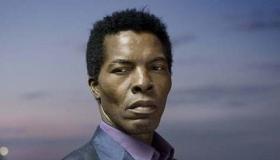 Jim Jarmusch offers some arresting visuals and dabs of mordant humor in this dreamlike mystery concerning a hitman in Spain. But because he insists on leading the viewer through a showy labyrinth built on shifting, over-tilled ground, The Limits of Control proves to be barren. Christopher Doyle’s fine cinematography can’t compensate for a lack of narrative acuity. While it’s tempting to characterize the picture as a love-it or hate-it piece, there’s not enough substance to fuel either side of the debate. Even hardcore Jungians and Jarmusch groupies will find themselves at a loss.

Isaach De Bankolé, the French/African actor who has appeared in other Jarmusch films, including Night on Earth, Ghost Dog and Coffee and Cigarettes, stars as Lone Man, a virtually silent figure who arrives in Spain for a job. After receiving cryptic instructions from two men in an airport lounge, he embarks on a journey consisting of a series of assignations, usually at cafes in various cities and towns. Matchboxes containing slips of paper with numbers on them are exchanged. Lone Man reads the numbers and swallows the paper, but only after listening to the rambling speeches of his respective contact. Luis Tosar plays a man fixated on violins, Tilda Swinton plays a platinum blonde right out of a film noir, John Hurt is a gregarious chap known as Guitar and Gael Garcia Bernal is, appropriately enough, the Mexican. On a train, Lone Man rendezvous with Molecules (Youki Kudoh) and Paz de la Huerta slinks about as the alluring Nude, who tries to entice him into having sex in the Madrid apartment he uses.

The incidents—links in one kill-for-hire fantasy—form a long, tedious chain held together with the faux philosophizing of Lone Man’s contacts, De Bankolé’s stoic visage and his compact physicality. The ambiguous, catchall title comes from a William S. Burroughs essay and refers to the many pronouncements that seem to cluster around notions of subjectivity, relativism and perspectivalism. For example: “The universe has no center and no edges.” “Nothing is true. Everything is imagined.” “La vida no vale nada/Life is not worth anything.” “Reality is arbitrary” and “The world is a handful of dirt.”

You’re telling us! The inability to identify one reality as more real than any other doesn’t mean all perspectives are of equal interest. Jarmusch intends The Limits of Control to be a riff on “freedom” at the level of the individual consciousness, unfortunately, nothing is more boring than another person’s dream. There’s a reason we only share them with our shrinks; they’re usually not worth interpreting.

Despite the lack of fecundity in this particular Jarmusch work, his vision is one I’d gladly spend time trying to decipher. Given the arid nature of his script, it’s surprising he can build up as much anticipatory tension as he does; credit De Bankolé’s presence and the painterly cinematography of Doyle, who captures the architecture especially well. The interiors and exteriors of various transport hubs and landmarks, such as Seville’s Tower of Gold and a modernist apartment building in Madrid, are rendered in superb compositions that use color and a few recurring patterns such as polka dots. It’s all the more frustrating that this craft is put to a rather obvious use, no matter how metaphorical and idiosyncratic Jarmusch claims he’s being.

Lone Man’s destination is an isolated, highly fortified home where American (Bill Murray) works. Because it’s quite obviously a CIA safe house and surveillance center, Lone Man’s dream is a broadside against American philistinism and militarism in the Bush era. The Limits of Control is a mundane statement against xenophobia and the irrational hostility toward art, music and science many have perceived in American policy over the last eight years. Although couched in the experience of a highly subjective protagonist, the movie is a generalized bromide against cultural, political and epistemological imperialism. Lone Man represents the rest of the world and the scenario is his revenge fantasy. Jarmusch may reference noir thrillers such as Welles’s

Tilda Swinton’s Blonde likens films to “dreams you’re never really sure you’ve had.” The Limits of Control is one you’ll remember having had, but because it’s so numbingly transparent, it’s one you’ll hope won’t recur.