close
A lot (of movie) for one sitting 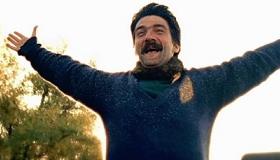 On the surface The Pope’s Toilet is a story about a brass ring clinging Don Quixote who peddles contraband on his bicycle to feed his family. It’s 1988 and Melo, an Uruguayan burg bordering Brazil, was chosen to host Pope John Paul II. Might as well have declared manna was going to fall from the heavens. Despite the sensationalism of Holy Father’s arrival, the subtext here is that there’s a speck on the map whose poor are treated as well as a backed-up john. Not much in the offering plate but some pretty landscapes and a ho-hum storyline. Failing some divine intervention, the turnout will be just as underwhelming as it was to see his Highness cross his heart.

A gang of middle-aged men on bikes slog through tough terrain revealing the smugglers’ daunting route. Sweeping rural landscapes, captured by avatar lensman César Charlone, unspool behind the gravel animated by their rickety, unlubed metal bike chains. The cyclists opt for off-beat vertical routes and harsh wet divides to avoid the straight roads where authorities lay in the waits. Each carrier packs parcels on the metal platform behind their saddles. Their purpose: to sell the goods to local Melo merchants. The main regulator of the bunch is Beto (César Troncoso), a mustachioed simpleton whose grandiose ideas to climb out of his low class predicament may do him in.

Life on the bike is no breeze. These despots are harassed by corrupt authorities who’ll poach a handle of whiskey or pocket a piece of the profits in return for a blind eye. The main villain threatening these carriers’ livelihoods is a customs official on the take named Meleyo (Nelson Lence). His parasitic ways come to the fore later on. A number of trips witness motorcyclists whizzing by with petrol canisters—clearly their cargo is more viable than the smalltime bread, batteries and bologna moved by Beto and his motorless ilk.

Pope news broadcasts in the background at home, at the pub—the coverage is following enterprising sorts ramping-up for the big Vatican visit. Hundreds of thousands are projected and man-on-the-street profiles reveal that many of the faithful are planning on cashing-in. Selling homes to buy a barbecue pit to roast meat or make sausages, trading life savings for fried-fritter-dreams. A lightbulb goes off in Beto’s head—with all the prospective drink and eat plenty of folks will need to relieve themselves. Eureka! A bathroom.

The big idea costs Beto. He gets fronted a loan from the crooked customs agent Meleyo. With enough to build the bathroom and even put down a deposit for a much sought after motorcycle, his family life is getting flushed down the toilet. Beto’s wife Carmen (Virginia Méndez) finds out she’s been deceived by her hubby. And daughter Silvia (Virginia Ruiz) is ashamed of her dad and makes plans to attend university far away. Her hope of becoming a news correspondent is an act of defiance against her father’s cloak and dagger smuggling racket.

As the big day arrives the believers set-up their tables—but the sacred festival is not to be. Everybody sells their souls to profit off the papacy’s arrival and when the rumor of the caravans of Brazilian busses turns out to be just that—rumor—the event goes south. The few that attend aren’t buying the wares. Papa blurts a “God bless you” and then dashes off in his Pope mobile. Meantime, Beto is chasing time since he spent his daughter’s tuition to finish the bathroom. It all comes down to the wire; will he make it back in time, on-foot, hefting the pricey porcelain head, or miss the parade and drink himself into oblivion?

There are few voices for the poverty-stricken. Their stories are not very sexy and typically hard to snuggle-up to. Filmmakers Enrique Fernández and César Charlone plant their sticks smack down in the middle of this South American Calcutta and lay out a fertile tale in which the underdogs get top billing—and they did not overlook the spacious skies and purple mountain majesties. Targeting the Catholic Church is bold. Still, the parameters of the smuggler’s life are glossed over. Not much happens between the trips to market and home aside from a couple of happenstance checkpoint interrogations. In terms of wiring, not every smuggler is a saint; surely there is more than meets the eye in terms of character deficiencies and surpluses. The duty of the viewer is to overlook the austerity and get carried away with the holy hoopla, but that’s perhaps asking too much for one sitting.