close
The road to L.A. is paved with good intentions 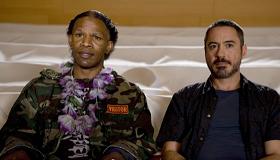 Notes of condescension are audible in this drama based on the real-life friendship between Los Angeles Times columnist Steve Lopez and homeless musical prodigy Nathaniel Ayers. The florid visual style of British director Joe Wright ( Atonement ) drowns out fine though not stellar turns by Robert Downey Jr. and Jamie Foxx and lessens the movie’s emotional impact. The uplifting power of music still registers—of cinema, not so much. Bumping The Soloist from last year’s awards season was a smart business decision: its chances of thriving as counter-programming once the summer onslaught begins next week are decent.

Always needing ideas for his “Points West” column—and while recovering from a bicycling accident—Lopez (Downey Jr.) decides to write about a gifted and schizophrenic man (Foxx) he meets by chance in downtown LA. Aiming to fix Ayers and allow him to realize his potential, Lopez makes him a personal and professional cause. As his series of columns gain attention, he insists that Ayers can only play a donated cello at a skid row shelter. Their friendship evolves over the course of a year and flashbacks to Ayers childhood and stint at Julliard fill in his background. Among the factors contributing to Lopez’s state of mind: his relationship with his ex-wife and editor Mary Weston—a character made-up for the film and played by Catherine Keener; his interaction with people he meets on skid row while doing research and helping Ayers; and the urban varmints ruining his lawn. The bleak environment for newspaper journalism and watching his colleagues get laid off also depresses him.

Can and should the voices in Ayers’ head be silenced? A cellist (Tom Hollander) from the LA Philharmonic agrees to give him lessons but insists on administering his own kind of religious healing. How long will the friendship between Lopez and Ayers last and what can it accomplish? While adhering to the classic story arc and avoiding easy answers Wright adopts a lecturing tone, as if he feels the need to school the audience on the nuances of Old World culture and how we should behave toward less fortunate brethren. “A little Beethoven will civilize you barbarous Yanks.” The movie’s title could refer to the onanistic tendencies of Wright and his creative team as much as to Ayers’ mental illness or Lopez’s sense of isolation. Ayers has a nice line about pigeons clapping as they take flight when he plays cello in his favorite traffic underpass. Wright chooses to literalize the image by following a few birds as they fly up into the sky and soar over the city.

Too often Wright indulges in the filmic equivalent of a crescendo. His treatment is overblown if technically skillful. Eventually it becomes strident, even though screenwriter Susannah Grant’s handling of the source material isn’t. By the time cinematographer Seamus McGarvey tries to duplicate his celebrated wartime tracking shot from Atonement on skid row, all attempts at modulation have been abandoned. This scene and others like it backfire by turning the winos, junkies, and crazies into objects of pity for the camera. Intending to highlight their demonization by religious groups and other charitably-minded and condescending social do-gooders, Wright undermines the movie’s message of respectful, constructive compassion. For other viewers, the point at which the movie crosses into dubious purple territory might be the abstract “fantasia” snippet—a multicolored light show that is apparently going on in Ayers’ head as he and Lopez are listening to the symphony rehearse in Walt Disney Hall.

Depicting the mysterious dynamic between mental illness and creativity on film (or any medium) is not easy, especially without bathos and cliché. Presumably, Wright was hired to bring a fresh outside perspective. Along with it, he brought the kind of pretension that gives classical music a bad name. The Soloist makes valid points about society being too quick to diagnose and label, and then prescribe drugs, prayer or incarceration; and the political commentary on Mayor Villaraigosa’s attempt to clean up skid row is an integral part of the book Lopez wrote based on his columns. But do we really need to be told that the key is to treat the down-and-out with compassion—to be their friends and treat them like human beings?

Wright is shrewd enough not endorse the idea that music or art can be a panacea, yet there’s little indication that The Soloist considers the disadvantaged worthy of being addressed as individuals in any other way. The leitmotif of exploitation becomes explicit when Downey Jr., Foxx and Keener dance with actual denizens of the skid row shelter (many appeared as extras) during the end credits. It smacks of a patronizing attempt by movie people to show they’re not afraid to mingle with the derelict and insane. They could’ve been taken advantage of by less talented filmmakers, but they’ve been exploited nevertheless.