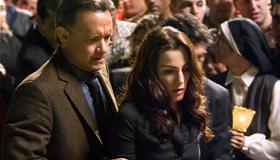 Director Ron Howard does a mea culpa for the turgid Da Vinci Code with this fast-paced piece of high gloss hokum. By any definition, the Dan Brown novels that brought us Angels & Demons and Da Vinci Code are poorly written excuses to hook faith-based audiences with dire religious pomposity and everyone else with standard airport bookstore tropes. At least in Angels & Demons the action moves at such a finely-tuned roar that religious groups inclined to complain will realize the movie is harmless studio product that features religion but, let’s face it, isn’t really about religion. With its frenzied tone and Tom Hanks looking very comfortable in his role as symbologist Robert Langdon box office receipts should be heavenly, though not quite at Da Vinci Code levels.

If there’s anything positive to be said about the original novels it’s that Dan Brown did his homework. Angels & Demons takes place at the Vatican and book-adapters extraordinaire David Koepp and Akiva Goldsman keep the goings-on nicely streamlined. Stripping the nonsense from their fact-infused script should count as Roman history course credit at many community colleges—and most of the instruction falls from the mouth of Langdon. First seen taking a morning swim at the Harvard University swimming pool, Langdon is whisked to Rome after someone kidnaps the four Cardinals next in line to succeed the pope after his death. This is one of those films where everybody knows everything at the exact moment they’re required to know it, which would be less believable in a movie that wanted us to pay more attention. Here, Langdon identifies the group responsible as the Illuminati, the kind of shadowy, everywhere-yet-nowhere organization that can fulfill all narrative requirements. Depending on whom one believes (Dan Brown being low on the list), although the existence of the Illuminati is a historical fact that dates back centuries, the extent of its modern day incursion into the high seats of government and religious power is up for discussion. Nevertheless, in one very long night that would impress 24 ’s Jack Bauer, Langdon must help the Swiss Guard (protectors of the pope since the 16th century) and local police find the four cardinals before one is murdered each hour, climaxing in the destruction of the Vatican at midnight.

It’s your basic ticking time bomb scenario (stopping just short of a red wire/blue wire climax) and Howard jumps in with nimbleness. The Langdon films still lack the corny fun of the National Treasure series: the thumb of history and Howard’s curious respect for the source material still presses down on the film, with its bombastic music, baroque sets and fetishistic love of red cardinal robes. Otherwise, this is extremely well-mounted, runaway train filmmaking, which is to say it’s fast, expensive and a bit out of control. Finding the four cardinals and uncovering the plot against the papacy depends on Langdon locating four churches scattered across Rome. How he does this while thousands mob St. Peter’s Square waiting for the new pope to be elected is hard to believe and harder to remember, although Hanks effortlessly walks, runs, jumps and drives around the Vatican vomiting scads of papal arcana. And it would be unfair to say none of this information is interesting. But the film (and the series) would benefit if Langdon were more than just an encyclopedic spouter of ancient trivia.

What’s less interesting is how the Illuminati plan to blow up the Vatican. Someone has stolen a container of anti-matter from the CERN particle physics lab and only beautiful brunette scientist Vittoria Vetra (Ayelet Zurer) can dismantle it before it explodes at midnight. Introducing anti-matter into a movie about ancient religion never stops feeling ridiculous, but the fascinating conflict between faith and science is one area that even the movie’s pseudo-interest in weighty controversies can’t diminish. What drove the Illuminati underground was the Church’s disdain for scientific truth, leading the Vatican to denounce the group’s fealty to their “new God, science.” Later, there’s a nice moment when Langdon (ever the agnostic) is asked by the Camerlengo, head of the Vatican between the death of one pope and the election of the next pope, whether he believes in God. His answer is truthful yet respectful, and it allows him entrance to the sacred Vatican library for some investigating. The Camerlengo is played by Ewan McGregor and it’s an awkward fit. He’s not too young, but he’s not an old enough soul. Better is the never-bad Stellan Skarsgård as the ornery Swiss Guard commander who needs Langdon to save Christianity, even though he nearly destroyed it by revealing Jesus’s modern bloodline in the first film.

Both Da Vinci Code and its sequel are talky affairs, but Angels & Demons talks and runs simultaneously, making it the better match of material and intended audience. It’s still heavy machinery requiring lots of horsepower to drive it, but it definitely goes. And any film in which the main character reminds us that Galileo was condemned and placed under lifelong house arrest by the Church for claiming the Earth was not the center of the universe is worth a ticket. One hopes that, next time, Langdon tackles the Inquisition.