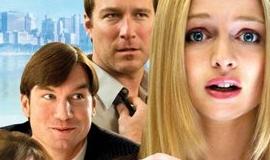 Trying to combine the chick appeal of your standard romcom with the sassy attitude of edgier Apatow fare like Knocked Up, this lightweight concoction about a pregnancy that throws a power couple into marital crisis is a smart, funny and raunchy surprise. Even though it’s often absolutely hilarious, the lack of any star power means box office returns for this likeable, limited, digital only release (mostly in E Cinemas where they exist) should be minimal. However, DVD (where it streets June 2nd) and cable may be the best venues for developing this comedy into the winner it deserves to be.

No new ground is broken in the screenplay by Michael Hamilton-Wright and Russell Scalise, but the results are fresh and witty in this story of married careerists. The couple’s bond and lifestyle are suddenly turned upside down when Angela (Heather Graham), a powerful businesswoman with an impossible boss (Lara Flynn Boyle), discovers she is unexpectedly expecting. Her divorce attorney husband, Curtis (Jerry O’Connell), is not pleased by the news and, even worse, is being fed a lot of bad advice by his buddy, Danny (John Corbett), who is on the outs with his own wife Sylvia (Katie Finneran). Complications arise when Angela and Curtis both suspect each other of having an affair as they watch their marriage and careers tumble just at a time when they should be happiest.

The title (not to be confused with the 1991 family flick of the same name) indicates this could be a standard-issue comedy dealing with the predictable complications that arise with the birth a baby but Baby On Board is really more about the difficulties of modern marriage, especially when both partners are workaholic yuppies hellbent on success in their chosen professions. Although the attractive cast does not possess the star power to put this across in a crowded theatrical environment, they do make it entirely entertaining to watch. Graham, who is becoming queen of the straight-to-video thesps is quite appealing here, while O’Connell nails the confused and frustrated conundrum of a man unprepared for the twists life is throwing at him. Corbett, playing against the “dream guy” image he cultivated with My Big Fat Greek Wedding (the holy grail of this genre) is the perfect smart ass know-it-all who mucks things up for his best friend—even though the way he conducts his own personal affairs is downright pathetic.
Finneran is fine but doesn’t have a lot to do, while Flynn Boyle as the ultra demanding boss is funny and ultimately even sympathetic.

Director Brian Herzlinger whose only previous feature was the mildly amusing documentary, My Date With Drew about his 30 day quest to conquer Drew Barrymore, does well navigating the tricky and usually predictable romcom format with this slight but enjoyable romp.