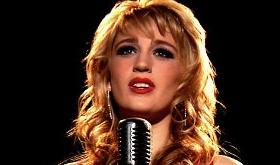 As the mysterious hit man at the center of the neo-noir thriller Break, actor Frank Krueger displays all the physical characteristics one expects from an underworld lowlife: a piercing stare, husky voice, muscular frame and a consistent 5 o'clock shadow. From the first time Krueger finds himself in a poorly choreographed fight scene or utters the inane dialogue by writer/director Marc Clebanoff, Krueger's performance Break s apart, taking the entire independent crime drama down with it. Poor word of mouth and a lack of well-known leads will severely limit the film's theatrical opportunities in the specialty market for distributor Cinema Epoch. Produced by Clebanoff's own company, Odyssey Motion Pictures, Break will enjoy modest home video business, a given for all genre films, but nothing more.

Break is the one-word clue hired thug Frank (Krueger) hears just before his elderly victim succumbs to a poisoned drink. This hit will play a significant role as Frank accepts a later assignment to kill the pretty girlfriend (Sarah Thompson) of a shadowy gangster known as "The Man" (Chad Everett). The problem for Frank, a common occurrence for movie hit men, is that he's fallen in love with his female target.

The one fun thing about Break, the best decision Clebanoff makes, is a series of colorful cameos from familiar character actors. Draped in a leopard-print robe and surrounded by scantily clad women, David Carradine makes the most of his brief scene as a weapons dealer called "The Bishop." Charles During delivers a quick monologue as a senior Mafioso. The supporting player who appears to be having the most fun is Michael Madsen as Frank's wisecracking crime associate. Madsen comes with more noir credibility than his co-stars thanks to popular roles in Quentin Tarantino's Reservoir Dogs and Kill Bill films. At the same time, Madsen is a bold reminder of all that Clebanoff gets wrong when it comes to noir.

Thanks to Odysseus Motion Pictures, Clebanoff will continue to function as a one-stop producer for independent films. When it comes to directing his own screenplays, he shows a lot of room for improvement. For the rest of his crew, cinematographer Tom Otholt, editors Ran Ballard and Vashi Nedomansky and production designer Alex Cassun, Break remains a little-seen misstep instead of a quality calling card.

Only Madsen walks away from Break with his reputation unscathed, and this is if only because he's already something of a B-movie kingpin.