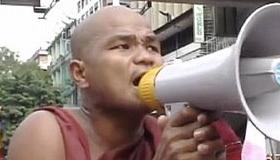 In September 2007, demonstrating sheer willpower and uncommon courage, Burmese video journalists, guerrilla demonstrators and protesting Buddhist monks revolted against their country’s decades-long military dictatorship. Caught on camera by young, self-trained VJ’s (an underground network of activists who risk their lives daily to document their country’s oppressive conditions), the epic Burma VJ proves once again that--primarily because they exemplify real life concerns--political documentaries often incorporate more harrowing twists and turns than most Hollywood thrillers. I wish I could say Burma VJ will find a deserving theatrical audience, but lacking that, HBO provides a worthy cushion after a short exclusive release by Oscilloscope.

According to the director Anders Østergaard (an award-winning Danish journalist and documentarian, noted especially for the POV sleeper Tintin and Me ), Burma--ranked beside North Korea--is one of the worst countries in the world to operate as a journalist. Østergaard began working with his central character, a young Burmese documentarian, code-named “Joshua,” on a “small, intimate, psychological” film in an effort to understand why these “reporters without borders” risk their lives to document the world around them. But when the full impact of the rebellion and the dramatic turn of events in Burma (captured by concealed, pocket-sized, consumer-level cameras) hit Østergaard, he realized the material, which contained the potential to expose a tale of high political intrigue, also presented an opportunity--and moral obligation--to reconstruct the entire sequence of events, and thereby, chronicle world history in the making.

In 1988, “Joshua,” a young boy at the time, witnessed a student-led demonstration on the streets of Rangoon, demanding that the generals relinquish their power. Even the Nobel Peace Prize-winning Aung San Suu Kyi, daughter of the late Burmese nationalist leader (whose resistance to British colonial rule culminated in Burma's independence in 1948), returned from England to lead the revolt. Like Gandhi, Martin Luther King, Jr. and Nelson Mandela, she symbolized heroic and peaceful resistance in the face of oppression. But at the end of the day, 3,000 protesters lay massacred in the streets. Aung San Suu Kyi was placed under house arrest where, after a brief period of freedom, she remains to this day.

Nineteen years later, this formative experience instigated “Joshua” to document the massive rebellion, led by 100,000 peaceful Buddhist monks, against the Burmese military junta. After the government ousted foreign reporters and shut down the internet, the Democratic Voice of Burma--led by “Joshua” from a safe house in Thailand, after his life was threatened--served as the world’s eyes and ears. Alternating between the DVB’s raw footage and Østergaard’s impressive re-enactments, we’re stricken by helplessness and grief as monks are beaten and murdered. The footage, smuggled out of Burma, via trusted couriers, finds its way to the DVB TV headquarters in Oslo, Norway. Their reports, broadcast on BBC and CNN, eventually return full circle by satellite to Burma in order to counter the regime’s propaganda and misinformation.

Burma VJ: Reporting from a Closed Country reignites the gut-wrenching ethos of early cinéma vérité as it reaffirms the power of “film truth” and the imperative for freedom of speech as a fundamental human right.