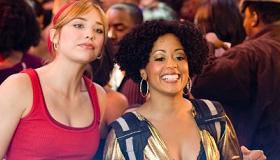 The Wayans Brothers bust out all the expected moves and movies in their latest spoof, with attempts to deflate the racial posturing of their targets—distinguishable from the more juvenile mockery. The picture shrivels after the first reel, however. The sketch comedy format and its execution can’t sustain anything too serious—or funny for that matter. Wayans fans should note how the baton is being passed to the clan’s next generation. That won’t influence how much business it does; the holiday weekend is chock-full of heavyweight competition. Look for Dance Flick to get squeezed by machines and museum guards.

With Damien Dante Wayans in the director’s chair and Damon Wayans Jr. taking the lead role, Dance Flick lampoons movies in which teens hoof their way out of the ghetto (and sometimes the ‘burbs) and into the arms of pre-selected, racially diverse peers. The carefully choreographed gyrations in You Got Served, Step Up and Stomp the Yard —to take three examples—are risible due to, among other things, those movie’s insistence on carrying messages about the role talent can play in fostering racial harmony, aiding in socio-economic mobility and affording kids the chance to realize their dreams.

The Wayans also send up the likes of Hairspray and High School Musical, throwing in mini-parodies of Dreamgirls, Ray, Little Miss Sunshine and Black Snake Moan, to boot. The allusions cohere around exploitative depictions of African-Americans, which of course doesn’t mean the Wayans refrain from deploying them. (Interestingly, they do avoid Hispanic and Asian stereotypes.) The veneer of tolerance and street cred in dance movies is a sham. According to Dance Flick they’re as formulaic and confining as any other type of film. And while the Wayans pinpoint these more culturally significant exaggerations, they never waiver from the belief that greater laughs will be triggered by showing a girl deliver her baby on the dance floor, or a blind guy fall through a manhole. Cartoonish physical comedy, celebrity slamming and genitalia gags are still their bread and butter.

Littered with bad puns and fragmented scenes, Dance Flick exposes the artificiality of the subgenre in numerous ways, including a big, self-aware, musical number demonstrably shot on Paramount’s backlot. Pro forma and tasteless, if not excessively vulgar, the movie loses its urgency when it becomes an almost verbatim example of the melodrama it’s skewering. An official poster hanging in the school hallway reads, “Don’t Go to College It’s a Waste of Time.” The same can be said of Dance Flick, despite its faint intonations of depth.

I was reminded of a certain brand of reality TV and trends exemplified by Fox’s new show Glee. In an era when we all supposedly have talent (even for losing weight) and everyone is encouraged to pursue their showbiz fantasy (using vehicles designed to inflict maximum pain on the public), maybe it’s a hopeful sign that some in the entertainment community have the temerity to push back? Some would argue the Wayans exemplify the phenomenon—or at the very least aren’t in a position to throw stones. No matter how much the Scary Movie franchise and White Chicks grossed they’ve never gotten much respect. I would assert their talent for buffoonery is at a level the average person on the street can only aspire to reach. Besides that, comedy is hard—harder than learning the latest dance step or pursuing an interracial romance in high school.