close
It’s not unlike The Jungle out there 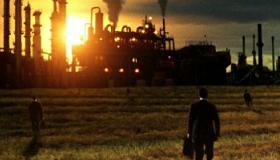 Participant Media, the force behind the Oscar winning An Inconvenient Truth, is back (along with River Road Entertainment) lending its considerable focus on social issues to this troubling and shocking must-see look at the American food industry. By lifting the curtain on the practices of the few companies who control the flow of food into the supermarkets and fast food restaurants, filmmaker Robert Kenner will have you thinking twice the next time you cut into a piece of steak or chicken. Excellent in every respect, the graphic animal violence and serious nature of this compelling documentary will limit theatrical revenue, so don’t expect another Inconvenient Truth, but it should do well down the line on DVD and Cable, appealing to consumers who want to know just what they are putting into their stomachs.

Kenner spent six years working on this look at the American food industry and his conclusions send shivers down the spine. Particularly disturbing is his contention that the Government has been a partner in shielding the public from the truth and negligent in their duty to regulate industries that are careless with the foods we eat. This stunning and vitally important doc pointedly shows how food industry lobbyists and lawyers basically took over the government agencies in charge of policing the very companies for whom they worked. With a handful of corporations controlling everything and putting the bottom line ahead of safety, Kenner, with the help of consultants Eric Schlosser (author of Fast Food Nation ) and Michael Pollan (author of The Omnivore’s Dilemma ), gets to the heart of the matter, showing how the health of the country is being sacrificed in the service of corporate greed.

Broken up into several segments, the doc explores the “factory farms” and conveyor belt mentality that has taken over the production and dissemination of food, including the chicken and cattle producers who work in dark, hidden squalor but are so afraid of losing their livelihoods that they won’t—and can’t—go on camera. Only one farmer agreed to be interviewed and show the sordid process of breeding and raising chickens and she has now lost her contract with Perdue Farms. The doc also shows how Monsanto, the former chemical company responsible for Agent Orange, has in a span of just 10 years been able to get its patented gene in 90% of America’s soybean seeds, forcing farmers to buy need seed from the company every season.

One particularly poignant and human segment follows a mother and daughter to Washington D.C where they perform advocate duties warning people against the increasing instances of E. Coli turning up in food processing plants. The daughter’s two year old son died after consuming tainted hamburger meat and it led to her personal quest to get lawmakers to pass laws preventing this kind of thing from happening to others. Her seven year journey has been full of roadblocks set down by an industry that has its tentacles reaching into government and resisting regulation at every turn.

Unapologetically graphic and painstakingly realistic, Kenner’s film interviews several people who are victims of the industry’s strong-arm tactics, but perhaps unsurprisingly no one from any of the companies in charge of America’s food supply would go on camera, and in many cases actively tried to prevent others from participating.

It’s a sobering and worthwhile look at an important subject many have not even thought about. Like An Inconvenient Truth, which also offered dire warnings about life on our planet, Food, Inc.’s end credit sequence offers numerous ways the consumer CAN and should make a difference.