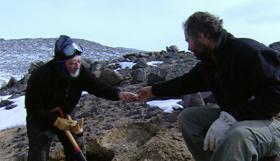 Rooted in the frozen tundra of Antarctica is a mystery, a big unknown, and for geologists, this might as well be Mecca. Day-in, a gaggle of brains brave the frostbite and find a plot to base camp. With their lo-fi tools: pick axes, loops and shovels, they tear and gawk at what lies beneath the surface to strike a discourse. Things get orgasmic when lucking on a leaf fossil or little moss fragments. The willing play tea bag in a filthy frozen ice cube way off the radar for months or years. This alien domain is piquing the interest of mainstream folks who fess-up to the logic that humans better try to do something quick, lest the ice that surrounds these geologists disappear for good. Expect a steady set of eyeballs tuning in as Sundance rolls out its green carpet for this doc. The return in greenbacks will be decent once folks turn attention spans from swine to saving Mother Earth.

It may be that mankind wants to land on Mars one day. That's fine and dandy, but Antarctica is Mars on Earth. The freaky weather conditions of this no-man’s land atmosphere is just daring us to try and take it on so we can get gobbled up and forgotten about. I would doubt many scientists (no matter how brave) would go it alone out in this torrent of close-calls. Without the supply drops, the radios to the Mother Ship and stockpiles of stew and hash one would snack on soil sandwiches and drink their own urine as a last combo meal.

This is a documentary without agenda; it has carte blanche to dictate its own direction. While Werner Herzog brilliantly tackled the last stop on Earth a year ago he did it with a lot of his own witty captions and topspin. Here, we have a very patient filmmaker in Ann Aghion, who managed to let the rocks and the characters studying them speak. The sun appears as a puddle of melted gold and sears the senses. So too does the overall eyesore that we humans make on the once virginal landscape. Big rigs, makeshift tarmacs, trailers, tractors, drums of human waste. The notion of glistening igloos and a merging with the land are the stuff of fantasy.

The main suspects we trail are two Ph.Ds and their undergraduate kickaround kids. Professor Allan Ashworth is the most senior of the lot (reminiscent of James Coburn), and then there’s Dr. Adam Lewis, whose beard is not as grayed and brings a little feisty edge to picture. And the two students (some you can see breaking from the harsh conditions—who wouldn’t?) are Kelly Gorz, who misses life back home, and Andrew Podoll, who is taking this fellowship as a means to decide whether his Christian beliefs hold water. We get to know each a little bit. The students are doing their tasks: refilling the canisters with oil, walking around with some metal detector pack and a yellow remote control marking the data, and later stirring the pot of stew for grub.

The viewer gets to walk in their Sorels for what seems like a lugubrious day and night existence. Not much happens—but then again, everything happens. There’s not a lot of action as its conventionally defined. The gusting zephyrs are unfriendly. The silence of a snowfall as it blankets the little tented plot as a students sips tea is one meditative moment of many. This is more about a strain inside of the human condition to pore over sand grains and get perspective, what calls us seek these answers and leave an impression in the field—literally.

It may well be that humans aren’t meant to tread these grounds. No sign of soil to grow an ear of corn, no animals or fish or really anything around. All life is pretty extinct save for the scientists and a sect of local civilians who tend to be running from a past. Why get lost in the bleach white desert otherwise?

In the end there’s some ifs that can’t go unsaid. The crew that made this film definitely caught a dedicated handful of scientists busy and determined to the hunt for answers. But maybe because of the short time span in Antarctica capturing digs in the terrain, the layers into the field researchers (from America no less!) are quite thin. What if the film crew was there for a longer period of time? What would this piece look like then? Much feels second-hand and after-the-fact. It’s like a long cocktail party where the revelers go into the late-night as this united force—and the next morning one gets upset about somebody running off with his pants. Something deeper seems to want to come out of this construction. As a filmmaker, how can you be settled with this four-month visitation and then go into the editing room and cut it up without second thoughts or more time to ruminate?

It’s fair to say that the film is not lacking much depending on what you expect from it. The players submit themselves to this world where tills and glaciers speak. The payoff is relative and internal. Either way, it’s hard to determine if the film’s message can be swallowed without backwashing on what could have been.