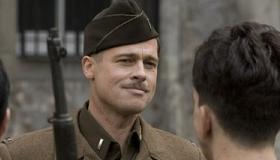 Quentin Tarantino allows full reign to his boyish enthusiasm with Inglourious Basterds, which takes an impish delight in sending up such Second World War adventures as The Dirty Dozen and Where Eagles Dare. Although derivative, Tarantino adds his own signature flamboyance in playing around with the genre. The squad, headed by Brad Pitt’s Patton-esque officer, plays a cat and mouse game with the scene-stealing Christoph Waltz as a German whose mental agility is impressive. It may be too long and too talky for some audiences but it’s likely to score highly in the popularity stakes following its Cannes Film Festival bow.

This unashamed slice of Second World War hokum finds Quentin Tarantino in mischievous form as he takes on the Second World War with the driving force of a roller coaster ride (with only occasional losses of momentum).

His film focuses on an all-Jewish American commando unit called The Basterds who are causing mayhem behind enemy lines in Nazi-occupied France. Lieutenant Aldo Raine, (the swaggering Brad Pitt in fine fettle) leads the unit.

Their particular predilection is scalping Nazis and wreaking havoc on Hitler’s occupying force. Although the soldiers drive the action, one of the strongest characters is a young French woman named Shosanna Dreyfus (Mélanie Laurent). Dreyfus seeks revenge for the murder of her family at the hands of evil SS officer Colonel Hans Landa (newcomer Christoph Waltz oozing charm and deception).

Landa plans the ultimate solution during the gala screening of a new German film to be attended by the German top brass, including the Fuhrer. In the meantime, Dreyfus has taken over the theatre in which the screening is set to roll. All their paths cross in a finale that pulls together the loose threads so carefully strewn along the way. It is orchestrated with a sense of flair and, frequently, nail-biting tension.

Tarantino has lined up a diverse mix of international stars. Joining Pitt is Michael Fassbender, Mike Myers camps it up as a British General and Diane Kruger displays some of the smoldering appeal of a youthful Marlene Dietrich.

The dialogue is as cool and witty as its wacky characters, but there’s too much of it. Waltz, a German TV actor, acquits himself with distinguished battle honors as he hunts down his foe with single-minded and ruthless determination before he springs his surprise.

At its current running time of more than two hours Tarantino’s skirmish with history still is too long and in certain sequences lacks pace. By giving his characters oodles of dialogue to spout he tends to slow down the action.

Anyone in the mood for a rumbustious romp with a few staggering set pieces will not be disappointed, while the star turns and cameos provide enough memorable moments to sustain the marathon.