close
Fails to deliver on any promise it may have had 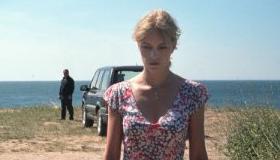 As far as love triangle thrillers go, Jerichow throws itself at the viewer like an unscrupulous vixen. A marriage influx, a crooked despot who’s lost his mojo and a collision of far-crying circumstance unspool. The sore thumb setup and severely stiff acting smothers whatever specs of promise the film aspires toward. Too minimal in its swing at drama and too insubordinate a script to fulfill its complicated themes, there’s no way this fly-by-night German flick is going to stick around long on the big screen.

A funeral for Thomas’ (Benno Fürmann) mother invites unwanted sorts—the kind of friends he wishes he didn’t have. Two shylocks find their nowhere man at the service and escort him home to extract a debt plus interest. After a game of “Where’s the stash?” grows old, they find the loot and leave the dishonorably discharged military man splat on his face. Penniless, the hefty sort goes on the dole and joins others in the unemployment lines. Thomas is hit with a reality check when the only job he can procure is as a cucumber harvester. While at the grocery store, Thomas’s ego takes a dive because his food stamps won’t cover the booze and cigarettes forcing him to unload the bags with a long line behind him.

Thomas doesn’t have any other trick but blank eyes and a robotic posture. Luckily, the 80 minutes is saved by a Turkish drunk named Ali (Hilmi Sözer) who crashes his Land Rover after a drinking binge. Generously, Ali lets Thomas take the crash rap when the cops come fetching for a DUI collar. Ali is a wealthy businessman and despite lucking out on that night he still manages to get ticketed for another boozed evening and loses his driving privileges. So he taps Thomas to be his driver and right hand in supplying various fast food joints he owns and operates throughout the German suburbs.

Showing up to work, Thomas is hit with a lightning bolt when he sees Ali’s sweaty, working wife, Laura (Nina Hoss), loading veggies and bulk can goods into a truck. The new team of Ali and Thomas go on their runs and quickly the job description carries on-the-job thinking. Store managers are pocketing cash instead of ringing-up customers, others are using competing distributors, forcing Ali and his new apprentice to crack some heads. When one bloke mans a Chinese food stand and doesn’t offer a receipt, Ali tells Thomas “Next time, you stir fry that guy.” Poetry.

After the long day of load and unload Thomas and Ali return, and from the moment Ali turns his back his wife is going at it with Thomas. This little game of foreplay in the shadows goes on for a while. A horny Thomas goes to the estate to be a voyeur or diddles around in the company of soybean oil and mango juice cans. Meantime, Laura is not to be trusted and Ali is quick to her subversive tactics. She’s been skimming from the top and making clandestine deals with competitors. This sheds Ali’s seemingly altruistic side in favor of his wife-beating ways. Does that mean that it’s justified for Thomas to play the safe pole for Laura to sit on?

When Ali mentions he’s going to Turkey to visit family and get the couple’s dream house fixed-up it’s ample chance for Thomas and Laura to quit the behind-the-scenes poking and go center stage. They quickly do sleepovers and try to play it off with normal work routine, but Thomas wants their romance to be official. They devise a plan to get rid of the abusive hubby upon his return. Plans are all set, except everything unravels at the last moment.

Filmmaker Christian Petzold didn’t fumble outright. He wrote a script that is lacking much dialogue but was able to plant a couple dramatic seeds. His choice with the lead actor, however, sinks the film. It may be Thomas was to be played in an understated and enigmatic way, but the role shows no vital signs. There’s little to nothing redeeming about Thomas. He is the bad boy with chiseled-features who doesn’t have to say much, but even wearing (and dropping) the restrained hero pants demands some vitality, some range. None of that is seen here. For Petzold I have two words: screen test.