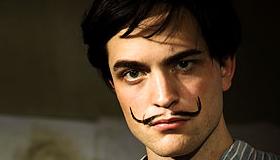 Being in English is the first of many strikes against Little Ashes, a wholly artificial attempt to dramatize the turbulent student days of Spanish painter Salvador Dali, poet Federico Garcia Lorca and filmmaker Luis Buñuel. You’re always aware you’re watching three callow actors pretending to be three callow, if gifted, artists. As Dali, Twiligh ’s Robert Pattinson tackles a love more forbidden than the vampire-human kind. Publicity surrounding his participation in the semi-salacious movie may juice its performance slightly, but with more seasoned beefcakes like Hugh Jackman and Zac Efron in multiplexes, few of his natural constituents will take notice.

Playing like a parody of itself, Little Ashes ( Little Asses is a better title; or perhaps Fops and Fascism ) earnestly traces the emotional bonds that tied the trio of Spaniards together beginning in 1922. Totalitarianism is starting to cast its ominous shadow over the country when Dali arrives at university in Madrid. Garcia Lorca (Spanish actor Javier Beltran) and Buñuel (Brit Matthew McNulty) are already at the center of a circle of privileged young men bent on being bohemians and channeling their abundant creativity. Garcia Lorca and Dali fall in love, which irks Buñuel, who is unabashedly homophobic and most likely jealous.

The romance ignites during a moonlit ocean swim as the pair furiously treads water in their skivvies, somehow managing a passionate first kiss. The scene is so fraught with meaning for director Paul Morrison that he can’t resist returning to it later. Sexually, Garcia Lorca and Dali never go much further however, because, while more than a passing phase or dalliance for Federico, the relationship proves to be just another step in Salvador’s process of eccentric self-creation. When it becomes too emotionally intense he bolts for Paris, where Buñuel has gone to develop in a freer artistic atmosphere.

Dali returns to Madrid for the movie’s raciest scene, during which Federico has sex with his close friend Magdalena (Marina Gatell) while Salvador watches and pleasures himself. Dali goes back to Paris to pursue fame and fortune. Some years later, in 1936, he and Federico meet again. Garcia Lorca is now a popular playwright and activist who champions the peasant and working classes against General Franco’s right-wing dictatorship. Married, Dali is even more widely renowned. With the Spanish Civil War about to commence, the real world finally and tragically intrudes on all their art- and lovemaking.

Early in the preposterous period piece, Buñuel criticizes Garcia Lorca’s poetry for being sappy and naïve. That’s a fair criticism of the movie itself. Morrison and screenwriter Philippa Goslett sentimentalize Garcia Lorca and reduce Dali to an alternately raving and insipid caricature. They’re determined to tell the audience which bits of the psychosexual turmoil are healthy and ennobling. The result is that Little Ashes mirrors the often-embarrassing juvenilia of three talented artists and comes off as hopelessly immature. It’s missing a convincing texture or details that might draw the viewer in. The political climate is a prop and the artistic output of the three young men goes unexplored—its relationship to their personal lives remaining faint or, at best, hokey. The title comes from a comment Federico makes about one of Salvador’s paintings but is hard to make sense of (not least because of Beltran’s heavily accented English). Conveying artistic genius, whether literary or painterly, on screen is a formidable challenge. Although the characters refer to themselves self-mockingly as geniuses, Morrison and company take a much more self-serious and histrionic view, which impedes their own cinematic success.

For a movie about revolutionary artists whose motto was “No limits,” there’s a long list of things holding back Little Ashes. Pattinson deserves a pass for his tentative performance: he’s left dangling in the fragrant Iberian wind along with all the other actors. Looking beyond their cringe-worthy Monty Python accents, the production makes Madrid look extremely dull, more like a provincial backwater than a vibrant capital city. The filmmakers would argue that was intentional because the story takes place during such a repressive period, yet it has more to do with amateurish art direction and set decoration. Still, everything flows from the decision to make Little Ashes an English-language film. Shooting for a more accessible work, they ended up with something ridiculous.