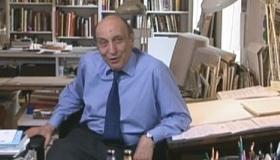 The life and career of NY artist Milton Glaser, his childhood in the Bronx, education at LaGuardia High School of Music & Art and Cooper Union, creator of New York Magazine and enough famous posters, corporate logos and package designs to fill three careers, provide debut filmmaker Wendy Keys a documentary subject made for movies. Surprisingly, Keys tells Glaser's colorful story in a connect-the-dots manner. The result is an ordinary documentary about an extraordinary artist that will disappoint Glaser's many fans and fail to inspire audiences discovering Glaser to seek out more of his amazing art. Arthouse Films, which releases Milton Glaser: To Inform & Delight in New York May 22 with plans for a limited platform expansion throughout summer, will find modest box office beyond Glaser's NY fan base.

Glaser, who remains as vibrant and articulate as ever, gives Keys' film lively interviews and wonderful, origin stories behind the many graphics and artworks that define his career: a psychedelic Bob Dylan poster from ’60s, his famous I ♥ NY campaign, package design for Grand Union supermarket and numerous posters for Julliard, Carnegie Hall and other clients both in NY and around the world.
Glaser grabs hold of one's attention with his intelligence and passion even when he's simply facing the camera 60 Minutes style. Between his recollections and nostalgia tour of NY, Glaser's art unfolds across the screen like tumbling dominos. What's missing is artful verve, cinematic experimentation and a willingness to tackle film biography in the manner Glaser and his many colleagues reinterpreted classic graphic design into something fresh and bold.

Keys, veteran journalist and a longtime administrator and programmer at the Film Society of Lincoln Center, knows a winning subject and wisely gives plenty of time to Glaser to speak about his life and work. But Keys, who appears in the film alongside Glaser, remains overly cautious in her filmmaking. Editor Tom Piper, a veteran of arts biographies, maintains the film's orderly pace. Cameraman David W. Leitner shows Glaser to be a striking figure, a man who can walk into a room and grab everyone's attention. Still, their efforts are uninspiring. As a result, Milton Glaser: To Inform & Delight falls into the Ken Burns genre of straightforward profiles, while Glaser deserves a movie closer in spirit to Jason Kohn's eclectic Brazilian doc Manda Bala.

A film about Glaser and his artwork will attract New York's arts community, especially graphic designers who will seek out the film as an inexpensive way to experience one of Glaser's famous Cooper Union classes. The response from artists will be strong but not strong enough for Milton Glaser: To Inform & Delight to compete nationally in the specialty marketplace. Expect modest box office below that of Valentino: The Last Emperor, a film that played well with NY fashionistas and Helvetica, director Gary Hustwit's superior documentary that made the topic of typography fascinating to artists and non-artists alike. Milton Glaser: To Inform & Delight will experience larger audiences on home video and cable broadcast. Of course, a better film would achieve much more.