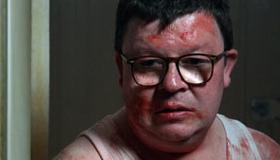 Just in time for Mother’s Day comes this low-budget British shocker going straight to DVD in the U.S. after initial UK theatrical run in December. Story of a young Polish girl caught up in the grisly antics of a family of serial killers delivers gross-out thrills in predictable fashion, so for slasher fans Mum And Dad fills the bill and should rake in the bucks in its ancillary afterlife. For the squeamish it’s a long sit.

A success at Slamdance, this efficient if familiar horror item is based, however loosely, on the real-life serial killers Fred and Rosemary West, but writer/director Steven Sheil puts his own Brit stamp on the package making it all seem primarily the stuff of fiction.

Performances are all top grade for this sort of thing, with Benson particularly creepy and Dido Miles matching him. Fedori doesn’t say much but knows how to translate fear, and later a fierce survival instinct, through her eyes and movements. Newcomer Howard, as the manipulative Birdie, is perfect, while Alexander expertly channels Norman Bates and other psychos of that ilk.

English life has never looked more unappealing and that seems to be the point, especially with the Christmas celebration that dominates the last part of this particular blood fest, which, with a little luck, could make it a cult item in the genre.