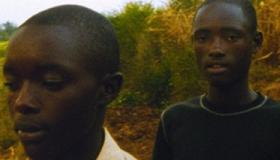 Rwanda’s genocide over a decade ago may have ended with a million or so Tutsis and Hutus massacred—but ultimately its survivors are cursed with remembrance. And orphaned children (the most invisible of all) continue to suffer most. Lee Isaac Chen’s Munyurangabo draws a penetrating picture of grown-up-too-fast teens trying to fit into adult shoes and wield a stolen machete to vow revenge, as if civil war raged on unabated. From capital city to the rolling hill recesses of a small village, somehow tainted youth lowers the blade and reverses its doomed course. The film is worth great attention and one hopes, with marketing by distributor Film Movement, the title will live a healthy life on DVD following a small theatrical release.

Along a bazaar in the capital city of Kigali unrest is abound. A scrappy youngster named Ngabo (Jeff Rutagengwa) and his loyal pal Sangwa (Eric Ndorunkundiye) take advantage of a street squabble and swipe a machete resting unattended. They stroll through crowded streets in slow motion—it’s an entrancing glide. Each is smiling and gently stroking each other’s neck. Their innocence is on full display. The unforgiving epicenter of fast-paced city life can’t rock their brotherly bond.

Turns out the two are partners in crime, hell-bent on taking out a man that years ago supposedly murdered Ngabo’s parents. Thickening the pot is the fact that Ngabo is a Tutsi and Sangwa a Hutu. What was supposed to be a quick hello and goodbye at Sangwa’s mountainside home becomes much more. Returning home spurs the catalyst in their friendship. Pitting the two against each other, you see that Ngabo is a hardened sort who bullies his untested buddy all the time. You sense that the entire motive to get revenge was never something Sangwa wants yet he tags along anyway.

Sangwa tries to prove to his father that he’s a good, resourceful man; that his sojourn—while involuntary—was not done in vain. He plows the fields alongside the family and gets a reprimand for his technique. His father is not willing to reconcile easily. While the family plow the fields Ngabo recoils. He’s lazy and unwilling to pull his weight. Yet he comes to the family quarters expecting a plate of food. Feeling despotic, he goes off and boozes away his troubles.

The two youths are supposed to complete their vendetta and off this guy somewhere far away. But Singwa has essentially been granted a second chance to become a member of the family and takes to the farm life. Ngabo no longer has the sway over his friend and can’t rule by force. Sangwa’s awakening and his father’s demise toward Tutsis has forced him to see his mate as more of an enemy than a brother, and sadly the two turn to old tribal allegiances—each going their separate ways.

Before long the film is following the two in a most unpredictable course. Ngabo soldiers on to try and fulfill his revenge while Sangwa’s father goes to town on his son and banishes him for good after getting word he’s an assassin. This beat down is so realistically wrenching the suspension of disbelief overtakes the moment. The reflexes jump and it’s impossible not to question whether this is a documentary or a narrative. Sangwa’s crying after hobbling off in the night is so primal. Just watching him experience suffering at the hands of his father is bruising.

Minimally scripted, the film showcases the whimsical abilities of the actors. They don’t need much once plotted in critical situations. And for the filmmaker, Korean-American Lee Isaac Chung, he somehow manages to lift a hefty weight on a loaded subject. His clever camerawork fits shots behind unlit doorways, where hanging burlap obscures half the screen and the other reveals Sangwa’s mom feeding her son by hand as if he were still an infant. The camera drifts away often into the overgrowth of plants and wildlife and trains on empty eyes eavesdropping on a provocative conversation outside, a dripping well dropping into a muddy bottom. Each spells solitude in its own way.

The film emphasizes that the humdrum of life may go on post-genocide, however the wounds (more psychologically rooted nowadays) still sting. The story told here reveals a Rwanda where a child doesn’t have the luxury of enjoying his age. In order to survive, one can’t hold onto innocence nor wash away the bloody, tattooed existence of the past. And even with this grim reality, there is some semblance of promise. Not everything corrupt stays that way.