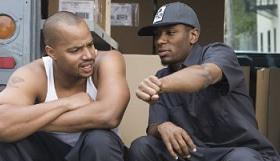 "Man, I just deliver packages for a living—what am I doing here?" begs pothead Leo (Donald Faison) in the opening voice over of Benny Boom's Next Day Air before bullets blast the speakers. It's a violent start appropriate for a comedy that takes violence seriously. (The perfect cast hails from both comedy and gun heavy primetime dramas.) A sincere screwball, surprisingly low on fat or fart jokes (a grand total of one!), Boom and screenwriter Blair Cobbs' debut feature will make enough noise at the box office to herald successful careers.

Faison ( Scrubs, Clueless ) has one of the best smiles in the business, and his Leo works it as best he can. Which is never quite good enough to pick up some honeys or convince his mom that he's a model employee at her package delivery business. The Employee of the Month award always goes to Eric (Mos Def, sly in a small role) whose silent geekiness masks a paroled ex-con. We're introduced right off to several comic set ups—a shrewish mother/boss, a philandering ex-girlfriend, a serious weed jones and Leo’s One Last Chance to make it right. Soon, though, literally all of theses plot points are cast aside when a stoned Leo mistakenly delivers a giant package to 302—not 303—and some crazy shiz goes down.

That box hails from Calexico and belongs to Diablo Bodega (Emilio Rivera) who stuffed it full of ten kilos of cocaine and shipped it to Philly (a city so gangsta that its newscasters say things like, "The bank robbers failed to set it off”), where his new distribution contacts Jesus (Cisco Reyes) and Chita (Yasmin Deliz) know they need to impress him or wind up dead. Bodega's had a real problem with cheats "losing" his drugs, so it's a serious bummer when Jesus and Chita swear they never got his coke, even though the tracking number says it arrived. Across the hall, Brody (Mike Epps) and Guch (Wood Harris) —two bumbling crooks all guns and no brains—see their powdery delivery as a miracle. ("God sent 'dat!" they yelp.) Brody's cousin Shavoo (Omari Hardwick) and quiet assassin Buddy (Darius McCrary) are willing to take it off their hands, but the nature of the streets stalls the proceedings long enough for things to get deadly.

Surprisingly, Next Day Air has a heavy dose of thematics. With the exception of the fierce Miss Deliz (whose ferocious gun moll is a highlight), this is a bro-heavy movie that laments the way money trumps trust. Everyone is hustling for their next dollar, and friendship and family don't stretch far. "What's worth dying for?" asks Shavoo. Here, violence isn't just a threat it's an actuality. Before all the guns meet up in an apartment, we've already seen several people get knocked off and have started to realize that Boom's comedy is a trap: We like these dudes, and know that while crime does pay, it always takes a deadly cut.