close
A franchise carrying forward the spirit of the Muppet movies 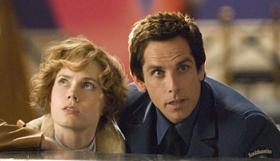 You will be pleased but by no means surprised by the sequel to 2006’s Night at the Museum. Night 2 is a wholesome, winsome action/comedy built for the 6 to 12 set. The original cast of characters is in the sequel but they primarily while away the hour and a half off screen. Star Stiller (as the returning night guard) and the ever-winning Amy Adams, as Amelia Earhart (a.k.a. the best thing to happen to girls’ role models since Mulan) are the center of the action. A curious and hopeful political subtext is woven throughout, even including a tiny Steve Coogan honorably approaching the White House because he, as he says, understands there’s a good man’s leading from there. Hopeful, patriotic and encouraging of a “can-do spirit,” the film deserves to outperform its predecessor in ticket sales and, if word of mouth and a summer opening contribute anything to its success, broadened franchise potential seems likely.

Larry Daley (Stiller) has turned everything around. He’s built a successful mini-empire out of his silly, second rate inventions and, facing a major deal with WalMart, goes to reconnect with his pals at the Museum of Natural History. When Larry finds out they’re all being replaced with low-maintenance holograms and shipped off to the National Archives (in the basements of The Smithsonian), he vows to save them from their planned obsolescence. Though he speaks to the eponymous museum board he holds no sway, and when the tablet that has the power to revive the wax figures revives the heroes and villains in the basement of the nation’s largest collection of stand-up models, their battles (bloodless and goofy as they are) have the capacity to impact the world outside the museum gates. Now, whether or not the power-hungry villain, Kahmunrah (Hank Azaria, channeling Stewie from The Family Guy ), will continue to wreak his havoc after the sun comes up is anybody’s guess. (Though the sane among us expect melted wax in the future of that new world order.)

The film is at its strongest when it honors traditions and embraces new personalities. Now the veteran, Stiller’s retired night guard goes tet-a-tet with a junior Smithsonian guard played by Jonah Hill. The self-serious demonstration of false authority ends with the sweetest handing down of a flashlight (the Brits call that a “torch”) that Larry has disarmed before hand-off. A more charming metaphor for the difficulties of making your way in a career field of great elders is hard to come by.

Earhart, the less than public savior of the film, espouses what Abe Lincoln (also played by Azaria) called “the can-do attitude on which this great nation was founded.” Adam’s Earhart is vivacious and adventure seeking and a funny foil to Larry’s new, safety-clinging persona as a “captain of industry” (Teddy Roosevelt’s words, not mine). While Larry’s made his son a secure home, his comforts leave him with an unexplored longing. An oddly similar hankering is present in Azaria’s Kahmunrah character. Kahmunrah’s motivation to lead a villain army is fueled by a desire to supplant his more revered, more coddled brother, Ahkmenrah (Rami Malek). I doubt I’m reading too much into this when I compare the film’s villainous elements: on the sunny side we have Larry’s soulless consumer comfort and in the dark corner we have an ambition motivated by an inferiority complex. (It’s like the kindercore love child of W. and Toy Story.) Adventure and success are fraught with consequences—for Americans and filmmakers alike.

But perhaps the most pointed political comment comes from Bill Hader as General Custer. After he’s led his “army” of animated wax-men into battle, he cowers behind a pile of loot, rapt in shame and cowardice. He confides to Larry that he’s a fraud and famous for his greatest failure (specifically leading 208 Americans to their deaths). Larry, for whom the job as night guard was originally an admission of defeat, forgives the ex-general his hubristic trespasses and kindly offers consolation. He assures him the past is past and says, “Be remembered for what you do tonight.”

Second (and third) chances abound for this cast of characters.