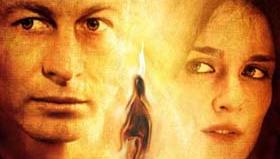 There’s a lot of illicit stuff flowing across that porous Mexican-American border these days—guns, drugs, illegal aliens and voodoo? That seems to be the central theme of Not Forgotten, the new release from video veteran Anchor Bay’s nascent theatrical arm. It’s a cliché-addled, nonsensical bit of piffle that would rightfully have vanished into the deepest recesses of the used-DVD dollar bin if not for the fortunate casting of television’s Mentalist, Simon Baker. Not that Baker is any kind of major star but banking on his celebrity to fill a few dozen paid seats in its exclusive Los Angeles release before beating a hasty retreat to disc and pay TV isn’t entirely stupid. If only the same could be said for the film.

The movies have long reveled in wacky pagan-Catholic fusion-cults. They’re always good mood material when flat-out Satanism feels a little too edgy. The sect-du-jour, in this case, is a Mexican derivation known as Santa Muerte (Saint Death!) in which adherents do a lot of chanting, bleeding and burning, occasionally even going so far as to slaughter a chicken or two. It’s the kind of thing nobody in a quaint Texas border town really gives a second glance until average, all-American, suburbanite Jack Bishop (Baker) finds his pubescent daughter Toby (Chloe Moretz) missing. With his Mexican-born wife Amaya (Paz Vega) at his side, Jack hops into action, working increasingly outside the parameters of the police (on both sides of the border) to locate Chloe, revealing an unsavory personal history and a rather creepy knowledge of Santa Muerte in the process.

As one might expect, there’s very little in Not Forgotten that isn’t entirely forgettable. Only the presence of Baker, Vega and Claire Forlani—a far better actress than her mostly low-level resume would indicate—set this apart from the broader swamp of B-grade exploitation fare into which it would normally fall. Everything else—stylized flashbacks, ritual montages, absurd plot reversals, unmotivated twists and a blind, rambling, bedridden señoracle —is just annoying.

It’s hard to lay the blame for this on anyone but co-writer/co-producer/director Dror Soref, a commercial director whose only noteworthy previous effort was the1996 “Weird Al” Yankovic video “I Love Rocky Road.” Not that Soref should be overly faulted for painting it by the numbers—Hollywood is nothing if not an incubator of genre lemmings—but audiences should be duly forewarned that a marginally recognizable cast does not a passable entertainment make.

This one is muerte on arrival.