close
As the title indicates, this one’s both Tough and Corny 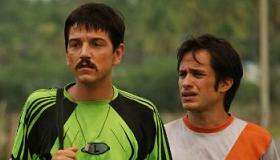 Fraternal bonds and national stereotypes are tweaked in a crowd-pleasing sports dramedy that reunites two of Mexico’s most popular actors. Portraying semi-ridiculous half-brothers with a flair for soccer, Gael García Bernal and Diego Luna revel in the broad material, which is rooted in domestic soil yet cultivated with an eye toward thriving in foreign climes. Rudo y Cursi should perform especially well in soccer-mad markets (meaning virtually every region other than the United States) where the notoriety of its leads and behind-the-camera talent may pick up some of the slack.

Not only do García Bernal and Luna share the screen for the fist time since Y tu mamá también, Carlos Cuarón, who co-wrote the screenplay for that (overrated) international sensation, collaborates once more with his older brother Alfonso. Rudo y Cursi is the first movie from the production company started by the Holy Trinity of Mexican filmmakers—Guillermo del Toro, Alejandro Gonzalez Iñarritu and the elder Cuarón. The up-tempo name of their outfit “CHA CHA CHA” matches this project, though the picture is not freewheeling enough to be deemed innovative or exciting.

Writer-director Cuarón mixes singularly Latin strains of physical comedy with a harsher, fatalistic outlook in a traditional sports package. Watching siblings Beto, nicknamed Rudo (Diego Luna), and Tato, a.k.a. Cursi (Gael García Bernal), horse around while working on a banana plantation in the first scene, you know you’re in for a romp. Their macho banter and teasing is preoccupied with sexual prowess and identity, and these themes appear throughout, characterizing their personal rivalry and the larger sports milieu. Living with their extended family (their respective fathers are long gone) in a remote village, Tato and Beto are stars of the local soccer squad. Tato also fancies himself a singer and aspires to become a musical star. Beto, who’s married with a fast-growing brood, is more serious about soccer but more serious still about gambling.

One day, a scout in a red convertible spots the boys on the pitch. Batuta (Guillermo Francella) proposes bringing one of them to Mexico City and shopping him to professional teams. The action switches to the capital where first one then the other tastes success. Tato wins rookie of the year honors and dates a shapely TV presenter. A national celebrity, he records a horribly cheesy song and gets his hair frosted. Beto excels as the goalie on another squad and acquires a taste for cocaine. Predictably their vices and excesses threaten their careers and dreams, which include building a deluxe dwelling for their beloved mother. Back home, their little sister marries a local drug lord and Beto’s restless wife decides to pursue her own career. Their downward spirals continue until the brothers square off on the soccer field in front of the entire nation.

Rudo y Cursi roughly translates as “Tough and Corny,” but the latter quality is more in evidence. Cuarón’s ambitions outstrip his screenplay, which tries to accomplish too much. The shady manager/agent Batuta delivers narration in which he waxes poetic about the parallels between life and sports. Aside from being over-the-top, these analogies and metaphors are undercut by the film’s lack of focus on the game. Garcia Bernal is hardly ever shown playing soccer and, while we see Luna a bit more often, the piece is deficient as a sports story. You’re never convinced that the two main characters or anyone connected with the movie really loves soccer.

So while it poses as a boys-own sports flick, the movie is actually intended to appeal to the vicarious hooligan in every fan of world-cinema. García Bernal, seen most recently as The Mexican in Jim Jarmusch’s The Limits of Control, and Luna, who played Sean Penn’s desperately fey boyfriend in Milk, can’t be accused of vanity or of taking themselves too seriously. For their parts, the Cuarón brothers, along with Senores del Toro and Iñarritu, have burnished their populist credentials without venturing far from home or the ordinary.