close
Not the austere drama you’d expect from director Ang Lee, but instead a warm, semi-idyllic recollection 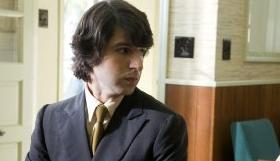 After the high drama and intensity of such films as Brokeback Mountain and Lust, Caution, director Ang Lee lightens up for Taking Woodstock, a comic look at the seminal music event mainly seen from the view of a young man, Elliot Tiber, who offers his rundown family hotel to the event organizers for use. Based on the book by Tiber and Tom Monte, it marks a nostalgic trip back to an age of innocence mixed with sex, drugs, nudity and of course rock ’n’ roll. Should appeal across the generations but especially to ageing hippies, while the engaging central performance from comic Demetri Martin lends an added, youthful zest.

Oscar-winning director Ang Lee and his producing and writing partner James Schamus turn the clock back to the late ’60s for a leisurely meander through the heady spirit of the era. This is not a concert movie but a gentle, anecdotal comedy that has oodles of nostalgic charm, as the locals of the Catskills find themselves swept up in an event whose transformative power changed a generation.

Lee’s vision of the 1969 Woodstock Music and Art Festival is filtered through the eyes of gay, Jewish, interior designer Elliot Tiber (Demetri Martin), and his immigrant parents who run a motel close to the action. The rest of the diverse cast includes British thesp Imelda Staunton, having fun with her accent as the suffocating, manipulative Jewish mother; Liev Schreiber giving an affecting performance as a transvestite ex-Marine; and Eugene Levy rocking on as a dairy farmer, whose land became the hallowed setting for the concert. Emile Hirsch plays Elliot’s buddy, a shell-shocked Vietnam recruit recently returned home.

It is easy to see why Lee was attracted to what became a defining moment in counter culture, as it’s set against a young man’s coming of age, coming out and assertion of individuality. The underlying themes of familial tension and personal sea changes are favorite Lee territory going all the way back to his second feature The Wedding Banquet.

Taking Woodstock (world premiered at the Cannes Film Festival, and in competition for the Palme d'Or) comes across as sentimental, but not overly so, while its relentlessly optimistic spirit could strike chords for Americans in the Obama era. The event itself is glimpsed only from a distance but, when Elliot does reach his vantage point, the view is poetically amazing. You feel the presence of Joplin and Hendrix rather than actually see them.

It has all been invested with an authentic feel for the period with such details as the Apollo moon landings on television, John Wayne’s True Grit playing at a local cinema and the echoes of Vietnam. It was also just before a certain Richard Nixon took over the reins so hope was still in abundance before it all turned to bitter disillusionment.

Against this wider backdrop, Lee concentrates on the human stories—among them Elliot’s relationship with his eccentric folks, the youthful Vietnam soldier coming to terms with his demons and the easy-going, cross-dressing ex-Marine who has acquired a new found inner-peace.

Lee, in a nod to Michael Wadleigh’s Oscar winning documentary on Woodstock ( Woodstock ), uses split screen techniques to show the crowd scenes and the concert arena as well as the muddy quagmire, which eventually ground things to a halt.

It would be unfair to slate Lee for turning in what is a light-as-air comedy that may seem out of kilter from the director of more profound works. Taking Woodstock leaves a distinctly warm afterglow.