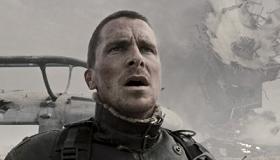 With blogs betraying its original ending, fan outrage over director McG and publicized onset meltdowns, Terminator Salvation had as much against it as for it. If this story about freedom fighters battling robots in 2018 had been the first in the franchise, it'd be heralded as a decent-enough summer blockbuster. But with two impossibly great films to be measured against, after Salvation packs them in opening weekend (as it surely—and justly—will), it will stay alive in fan consciousness only long enough for Warner to crank out another sequel or two—a fate better than Terminator 3, but much paler than the James Cameron originals.

Fourteen years ago, Skynet sprinkled the world with atom bombs and sicced robots to pick off the survivors. Kids, like teenage Kyle Reese (Anton Yelchin) and the mute Benetton child he babysits (Jadagrace), have spent most or all of their lives post-Apocalypse. They're like sewer rats—or at least, we'd like them to be—but besides having Yelchin give props to local culinary faves like two day old coyote ("Better than three day old coyote," he grins), there's the sense that no one involved with the movie has really thought through its basic tenets. Though they've been through a decade and a half of hell, everyone has white teeth, smooth skin and all limbs. The radiation poisoning that's sucked the youth from the residents of Chernobyl isn't a factor. In the compounds of The Resistance, the freedom fighters have all dredged up snappy camo pants and military vests. Outside, people live in suspicious Mad Max tribes. Though communication seems to have broken down, save for John Connor's radio broadcasts, English grammar is thriving—everyone speaks in full sentences with the pomp of a 1950s Biblical blockbuster. And though we're curious how the very old, the very young and the very ignorant have survived the last fourteen years of machine-on-man genocide, there's no real sense that they have. People don't seem toughened; they seem transplanted into a devastated world.

John Connor (Christian Bale, acting like Batman without the rasp) is prepared. Less so is Marcus Wright (Sam Worthington), an ex-con time traveler from the small window when Alice in Chains was popular. When an amnesiac Wright pops up in 2018, he's blindsided by the Terminators. "What year is it?!" he thinks to ask his rescuer, Kyle Reese. (In one of many moments of inanity, Reese doesn't clue in that he's not from around here or think to ask him what year he last remembers.) The entire film suffers from myopia; it speaks only in immediacies ("Hand me that gun!") and abstracts ("Do you believe in second chances?"). What it doesn't speak is human—the people have ascribed emotions that exist only to propel the plot. By contrast (and by illogical oversight), sometimes the machines seem more human than human—instead of Arnold or Robert Patrick's calm efficiency, when their prey fights back these machines lash out like playground bullies afraid of humiliation. The two—machines and men—are locked in an evolutionary race in which the machines are determined to advance faster than The Resistance can learn to outwit them.

Terminator 2: Judgement Day is an impossible film to follow. (Yes, I'm refusing to acknowledge T3.) But I wish Salvation would have tried. In this doomsday scenario, my BS meter sounded off as often as a Geiger Counter in Salvation ’s high radiation environment. Minutes after Yelchin and Worthington pull up to a desolate, desert, gas station hideout, where tumbleweeds and burnt cars stretch to the horizon, they're surprised by a giant people-harvesting machine. I was shocked, too. The bipedal robot is skyscraper tall and slow as molasses—if it was headed your way you'd see it in time to pack a lunch. Even more ridiculously, the ground shudders under its feet. What, was it tiptoeing?

The sound is better designed than the story. The primitive T-600s look tall and deadly, but their obsolescence squeaks through their whining joints. Their movements sound as painful as Oz 's arthritic Tin Man. Even the earth itself registers its pain: trees groan, wind cries, buildings heave. In room after room, we hear the buckling agony of the Titanic's last minutes afloat.

But McG is looking to the wrong James Cameron blockbuster for inspiration. Where T2 was grim, unsparing and logical, T4 is packed with harmless punches and bullets. After the first few fights leave our heroes unscathed (only the nameless get killed) we're never that afraid for anyone's safety. Time travel franchises get increasingly mired in their mythos and, now that we're in the future we've waited for, legacy has constrained McG and credited screenwriters John D. Brancato and Michael Ferris (whose actual contribution is debatable—McG has said he hails The Dark Knight 's Jonathan Nolan as the script's true architect). Every Terminator has reset the future. The most interesting course the film could have taken is to ask if after three Terminator time travel scrambles John Connor is still fated to be humanity's savior. Here, the old guard Resistance fighters don't accept he's the messiah, but why should everyone else? They're taking his word for it. For that matter, the film needs to convince us Connor hasn't already served his purpose. His immortal swagger isn't a glimpse of the future but a recall of the past, when kings and pharaohs told their followers that it was the rulers’ lives that mattered most. The film preaches dynasty, not revolution. When Connor insists that everyone stop attacking Skynet long enough for him to infiltrate and rescue Kyle Reese I almost wished they'd refused just so we could see what would happen if he lost his future father. Would he vanish? Flicker? Wince in pain and reach for a guitar to play “Johnny B. Goode?”

Last summer, blogs committed a crime: They leaked the original ending of Salvation. McG's intention was to upend the franchise with a subversive twist that acknowledged these questions and added new ones. And it was great. But because this ending was both too bleak and too well known, Warner Bros. changed it to a milquetoast crowd pleaser that feels like a cheat. It's an ending so terrible it spoils the moderate popcorn pleasures of all the nonsense before it. If the spoiler police weren't on red alert, I'd love to dig into it, but all I can say is if you live in LA, call me up after you see it and lets shout about it over beers. I'll need several rounds to calm down.