close
The family that plays together...

The Boys: The Sherman Brothers' Story 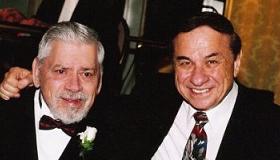 A touching and often darkly hilarious documentary on the life and careers of Disney's pre-eminent songwriting team, brothers Richard and Robert Sherman (directed by sons Greg and Jeff, who never knew each other as kids despite growing up mere blocks apart), this is the story of two guys who are about as close as close can be, both professionally and personally, but on a fundamental level just don't get along. (Think a smiley-faced version of The Defiant Ones, but with better music.) Given the cultural ubiquity of the Sherman's songs—they wrote “It's a Small World After All”, among scads of others equally familiar—even casual filmgoers should be intrigued, while film buffs and cineastes will find the doc's inside-show biz stories a real treat. Theatrical prospects should be solid; home video success is all but assured.

Star Wars composer John Williams pops up early on here, making the point that the sound we think of as most quintessentially American—the music of George Gershwin and Aaron Copland—was in fact made by first generation sons of Russian-Jewish immigrants. The Shermans—Robert (the oldest, born in 1925) and Richard (the kid brother, born in 1928) —fit squarely into that same cultural milieu. The children of a successful Tin Pan Alley songwriter dad and an actress mom, they were seemingly destined to work in show biz on some level, probably genetic.

The duo, who started songwriting together professionally in 1951, hit it big relatively quickly after the usual scuffling. In 1958, they wrote the rock ditty "Tall Paul" for Annette Funicello, then at the height of her Mickey Mouse Club celebrity, and Walt Disney himself quickly signed them to his studio and became their mentor. After that, the duo never looked back. They spent the next several years toiling profitably for The Mouse, achieving international fame with their scores for Mary Poppins and (as indie songwriters) Chitty Chitty Bang Bang, both of which were adapted for currently running international stage hits. They continue working together successfully today, albeit at a somewhat slower pace and on different continents.

Apart from the usual talking heads stuff (celeb admirers include Ben Stiller, who helped get the project off the ground), the film benefits from excellent and extensive interview footage with the Shermans, both through recent footage—Robert is a bit frail, but otherwise sharp; Richard is still remarkably youthful—and archival (Disney saw to it they were profiled extensively early on), as well as scads of evocative clips from the pair's movies. This was clearly a labor of love for the younger producing/directing Sherman Brothers, and their affection for their distant but oddly loveable dads is palpable throughout. It's also a testament to their skill as filmmakers that when, fairly late in the film, they drop the big bombshell life experience reveal that explains the difference in temperament between the brooding Robert and the gregarious Richard—Spoiler Alert: It involves the WWII death camps—it doesn't feel shoehorned in or exploitative.