close
Too dislocated to hit its mark 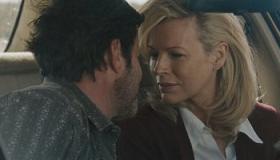 The Burning Plain —or, my preferred title, Miserable Blondes Climbing in and out of Trucks —marks the directorial debut of Guillermo Arriaga, the pen behind Babel and 21 Grams. Like those, his first time at the helm is a tricky bit of stitchery, sewing together interesting but thin characters into a portentous quilt. Tailored for middlebrows looking to dodge the summer's popcorn fests (an audience segment that should be good for at least moderate box office), it's a perfectly adequate way to squander two hours, though I dare say Terminator Salvation will better expand the mind.

Arriaga's approach is to work towards the center of his story from its four corners; the audience is never quite sure what they're watching until the big "Aha!" in the third act. It's a narrative cop out, but with the pleasures of making the audience feel like Sherlock Holmes if they figure it out before their seatmate. (I can't wait for the film where the big reveal is all the characters once ate at the same In-N-Out Burger.)

In very, very blue Portland, Charlize Theron plays Sylvia, a restaurateur who spends her afternoons recommending Bordeaux to her posh clientele. Her nights, however, are devoted to meaningless encounters with men who treat her like crap—a kindness she returns. Theron is hostile and adrift. Her posture is defiant, but Theron clues us in that Sylvia is utterly at sea—she's an iron anchor that refuses to rest.

Across the cultural landscape in two very, very yellow border towns, three catastrophes are happening in slow motion, catalyzed by a sudden disaster: a remote trailer explodes with a man and another man's wife locked inside in mid-coitus. We see the doomed couple (Kim Basinger and Joaquim de Almeida) in their weeks of furtive happiness, and jump ahead to meet their grieving families, locked in silent warfare with the hushed exception of teenagers Santiago (JD Pardo) and Mariana (Jennifer Lawrence), who plunge into a cathartic, hostile and stiff infatuation that lives out their dead parents' hopes and agonies. The longest loose end is a Mexican girl (Maria) in danger of becoming an orphan after her father's crop duster crashes in a field. Maybe you've already figured out how these stories link up, but by gosh it took me nearly an hour.

Part of my trouble in taking The Burned Plain as seriously as it would like is that it ladles each of its three blondes with so much self-punishing misery. So much misery, in fact, that each character (fortunate for Arriaga) has ample time to be seen naked. Watching all these grim sex scenes I yearned for a mere emotional overeater. (They're quite a bit more common, if Arriaga is curious.) Basinger is a weaker actress than Theron, but her scenes click better because her moments of joy are a relief. They're also the best example of an undercurrent in the film: the need for jaded children to think they understand adulthood, and our snide enjoyment at recognizing they don't. What Arriaga is driving at is the domino-like impact of isolation. It first destroys Basinger and then reverberates through all the related stories. But if he's aiming to show cause and effect, I wish he'd give his storytelling gifts some credit and let his themes play out in cause and effect order instead of using plot tricks for false suspense. Arriaga is interested in exploring the heart, but his maps scatter and squander the audience's attention.