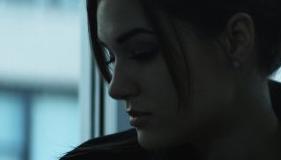 Bumping up against subject matter that helped launch his career back in 1989, Steven Soderbergh parts the veil on the life of a high-priced Manhattan escort during a severe recession. The title denotes a relationship entailing not just sex for money but the exchange of stimulating conversation and a proffer of classy companionship for discriminating gentlemen. As tricky as those things are to evaluate, satisfaction will prove much more elusive for the viewer than it does for any onscreen client. Some audience members (like me) will feel they got their money’s worth. Others will feel royally gypped. Sex, sales and tickertape works as an alternate title but the sales doesn't augur significant theatrical business.

The Girlfriend Experience doesn’t disclose anything remarkable about prostitution or swanky pros, but it holds your attention. Once more, Soderbergh demonstrates he’s a silky smooth craftsman, even though what precisely he’s pimping never becomes clear. If you’re sick of hearing about sex and/or the financial meltdown, or don’t care how one might affect the other, then skip his twentieth film. You’ll be missing an elegant piece—a lesson in artful economy that demonstrates vérité filmmaking doesn’t have to be grainy and grotty.

Its premiere at the Tribeca Film Festival figures, since the action takes place in the chic hotels and eateries of lower Manhattan—near the epicenter of the financial implosion that has triggered so much angst. Adult film star Sasha Grey plays call girl Chelsea, who’s hired to relieve stress the carnal way as well as simulate worldliness and sophistication. Money is never seen changing hands, yet it’s on everybody’s mind. It ought to be, given our minx-like protagonist charges well-heeled johns $2,000 an hour and dates may last from dusk ‘til dawn.

She’s an ambitious independent contractor who gets shuttled around in Town Cars and only doffs designer duds. In an effort to boost her profile and income, Chelsea consults with a number of financial and marketing consultants. She agrees to be interviewed by a journalist and ventures into the outer boroughs to meet a blogger who’s dubbed himself The Erotic Connoisseur (played by film critic Glenn Kenny, late of Premiere magazine). This sleazy arbiter dangles a trip to Dubai, but insists on sampling the merchandise first, implying that a good online notice will lead to even more lucre. Soderbergh scrambles the chronology of all Chelsea’s liaisons, cutting back and forth between encounters to piece together a profile of an inevitably sad yet surprisingly sedate routine.

Chelsea lives with her boyfriend Chris (Chris Santos), who works as a personal trainer, helping the type of guy who patronizes her get in shape—at a fraction of her cost, no doubt. About a third of the movie is taken up with Chris’s efforts to get ahead any way he can, short of selling his own body. He peddles a line of workout gear to sports stores and presses his boss at the gym for a bigger cut of the business he generates. He isn’t bothered by how Chelsea makes ends meet, until she announces she’s going away for the weekend with a client. This provides the movie’s major source of discord, and it explains Chris’s willingness to jet off to Vegas to party with three financial hotshots (well, at least they still have the use of a private plane).

Soderbergh doesn’t judge Chelsea or her patrons; he’s not a detached bystander either. He takes her seriously, his camera casting a sympathetic if diffident eye on her endeavors. The movie’s final scene, which is touching (emotionally), proves he’s not out to get anyone. The Girlfriend Experience is preoccupied with hustling, selling and marketing in all its forms. Because sex is never depicted—and there’s nothing especially explicit or violent (or alluring for that matter) about the movie—the physical dimension appears to be the least of its concerns.

Evidently, Soderbergh and his two screenwriters see the oldest profession as a pure model of supply and demand and as a social mirror that reflects whatever it detects—excess, depravity or ennui—with the same cool efficiency. There’s still an unfortunate redundancy to the exchanges, which the film’s non-linear, out-of-sequence structure only emphasizes. And yet, while Soderbergh and company might not have a lot to say, at least they don’t take a long time to say it.

Grey’s emotive ability is what you’d expect from a 20 year old with eighty blue movies under her belt. Ditto Kenny’s, whose lone scene and its voiceover aftermath are crucial to the story. Neither should quit their day job. Conversely, if Soderbergh wants to keep alternating between glitzy, commercial projects and serious works like Che, dashing off smaller, experimental pieces like this in between, I won’t complain...provided ticket prices for his movies aren’t subject to the same rate of inflation as Chelsea’s hourly fee.