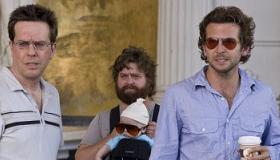 As soon as the lights dim, the eerie Elvis cover spins and the wind howls across the Las Vegas desertscape with the chill of a David Lynch tingler, it's clear The Hangover isn't another disposable comedy for louts. Todd Phillips has directed a nasty, brutish and brilliant comedy for louts. Opening numbers will be modest for this flick about three groomsmen who lose the groom the day before his wedding, but exuberant word of mouth will give it legs so showgirl-glam long they stretch into the next decade of Phillips' career -- smart-betting execs have signed him to develop eleven films, including The Hangover 2.

Doug (Justin Bartha) is marrying Tracy (Sasha Barrese), and her dad ( Arrested Development 's Jeffrey Tambor) confidently gives his classically handsome and square son-in-law-to-be the keys to his treasured convertible for his bachelor party road trip to Vegas—with the conditions that Doug (a) prevent friends Phil (alpha douche Bradley Cooper) and Stu (henpecked Ed Helm) from driving and (b) prevent Tracy's brother Alan (Zach Galifianakis)—a friendless pervert invited along out of generosity—from drinking or gambling. If these plot points sound lifted from Ferris Bueller's Day Off and Gremlins, take heart; Jon Lucas and Scott Moore's savage script warps the clichés. Even though we know the end 90 minutes before we get there (c'mon, did you seriously think Doug would wind up dead?), the fun lies in retracing Phil, Stu and Alan's steps as they wake up after a crazy night that's given them collective amnesia. (And also, a tiger, a missing tooth and a baby.)

With the entrance of said baby, we're worried that the trio is going to transform into Steve Guttenberg, Tom Selleck and Ted Danson. But then Galifianakis mimes the baby pleasuring himself—did I mention Alan was banned from coming within 200 feet of a school?—and we're jolted back into Phillips' ruthless comedy. Miraculously, we still like Alan and Stu and Phil even as we crack up when they get tazed and beaten. Phillips has pulled off a feat of balance that rivals Cirque du Soleil down the Strip. We see these leads—all of them guaranteed to rocket up the hot list—as the men they are and the men they want to be. Men who find their friends, damn the cost, and are centered by at least that slim moral thread.

The third act is watered down by the addition of more conventionally wacky characters (the sweet hooker, the Asian gangster, Mike Tyson) and the no rules jazz of the earlier scenes is hemmed in by the need to resolve this mess in time for the vows. But The Hangover 's mediocre gags would make most comedies' trailers. (And its daring gags, their Director's Cut DVD.) Yet even when all the story ends are tied up with a neat bow, stay tuned for the credits that slip you one last shocker. Hint: Wayne Newton isn't saying "Danke Schoen" to his agent for squeezing him in this montage.