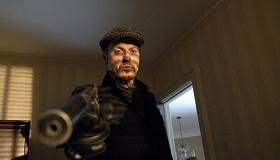 If a major studio had backed Michael Keaton’s It’s a Wonderful Life inspired directorial debut, odds are it would have been turned into a dark comedy instead of the wry, reflective drama that is The Merry Gentleman. Of course it’s impossible to say how the imagined picture would compare qualitatively to this respectable effort, but the wounded-angel-saves-suffering-hitman premise certainly lends itself to triggering yucks. What’s more, the resulting, undercooked movie would benefit from its own similarly measurable objective. While Keaton’s name should help its initial performance amongst a relatively mature demographic—that is, moviegoers of age in the 1980s—the modest film won’t have sturdy theatrical legs.

Originating from and set in Chicago, The Merry Gentleman is an urban indie with lots of tinkling piano music to indicate significance and the odd train whistle to indicate we’re not too far away from silos brimming with heartland values. Structurally, the title role, assumed by Keaton, is the most problematic. Yet much will hinge on viewers’ tolerance for Glaswegian thesp Kelly Macdonald in twee mode. While her talent is unassailable, I found the performance and the role to be heavy on butter and sugar—and therefore a tad annoying. She plays battered wife Kate Frazier who flees her abusive cop husband (Bobby Canavale) and arrives in the Windy City just before Christmas and just in time to save a suicidal hit man from jumping off a building after carrying out a job.

Keaton’s Frank Logan, hiding behind a goatee and beneath a flat cap, is a tortured soul with walking pneumonia and patently in need of a Christmas miracle. When their paths cross later and she comes to his aid again, an elusive bond develops between Kate and Frank. She’s as nervous and loquacious as he is still and quiet. Is he going to kill her or romance her? The luggish-if-shrewd detective (Tom Bastounes) investigating Frank’s handiwork interviews Kate and, like everyone who comes into her orbit, immediately takes a liking to her. She’s a magnet; an innocent in a harsh world, an angel with a Mrs. Doubtfire accent toward whom everyone (except me) gravitates. It’s only a matter of time before her hubby shows up and the smitten Chicago detective starts to suspect their common rival, Frank.

The Merry Gentleman is intelligent and has enough understated humor to telegraph the comedic direction the concept might have gone in. There’s grittiness and foul language to counter any inkling that, by referencing God and taking spirituality and organized religion seriously, the movie is bent on precious moralizing. As intriguing as the dynamic may be, ultimately Frank’s lack of definition, along with an inconclusive ending, disallows any certainty regarding what the filmmakers were really after.

Screwed-up assassins are quite popular these days. Consider Pierce Brosnan’s burnout in The Matador or Ben Kingsley’s alcoholic Pole in You Kill Me. But they’re usually played for morbid laughs. When we first see Logan we suspect he’s either a priest or a layman in need of one. He turns out to be a husk of a character—to the extent that the irony in the movie’s title doesn’t fully register. We don’t learn enough about what’s going on inside his head or his heart. Part of the problem may be that a guilty conscience, or the outward signs of one, doesn’t strike us as adequate motivation in this secular age. Whatever the macro cultural roots, screenwriter Ron Lazzeretti’s unwillingness to flesh out the character is exacerbated by Keaton’s propensity to indulge in pregnant pauses during the scenes in which he appears. He and cinematographer Chris Seager do choose some comparatively adventurous camera angles and overall Keaton exhibits a steady directorial hand.

Nevertheless, letting a character be laconic and allowing for long silences doesn’t automatically translate into riveting cinema. The mystery and suspense you’re trying to achieve can just as easily dissipate. There’s a great deal to be said for not dividing the world into angels and devils, or any other stand-ins for absolutes. But that’s no substitute for generating dramatic or comedic tension and releasing it in satisfying fashion. The Merry Gentleman poses intriguing moral questions and its reluctance to offer pat answers is a mixed blessing. At least it doesn’t go for a false, corny resolution or grovel for lowest-common-denominator laughs or tears.