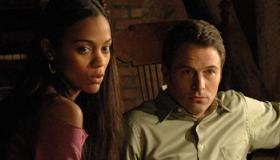 Adult fans who never tire of ghost stories may seek out The Skeptic, writer/director Tennyson Bardwell's polished but dull supernatural drama for IFC Films, featuring an overacting Tim Daly as the frustrated inheritor of his aunt's haunted house and Star Trek 's Zoe Saldana as a pretty psychic who comes to his aid. Daly may be a familiar face but he lacks the marquee value necessary for attracting sizable audiences to an overly familiar tale. Without the elaborate special effects favored by teen genre buffs or a filmmaker admired by horror fans (Guillermo del Toro for example) The Skeptic will fail to attract the mainstream audiences that made The Haunting in Connecticut into a current hit or the more discerning specialty fans behind recent foreign horror fare like The Orphanage and Let The Right One In. A rare genre release for IFC Films, a specialty distributor best known for foreign dramas, The Skeptic will fail to attract any positive word-of-mouth, guaranteeing its poor box office as a horror tale too modest for mainstream cinemas while too escapist for arthouses.

Bryan Becket (Daly) is a workaholic attorney who inherits his elderly aunt's sprawling Victorian house just as his marriage turns sour. He moves into the old, dark house to watch over the valuable antiques and wine cellar and also take a break from his wife. It's not long before ghostly visions, including a woman at the base of the towering stairs, start occurring. While Becket's coworker (Tom Arnold) and a local paranormal expert (Bruce Altman) fail to believe his scare stories, Cassie (Saldana), a young psychic, helps him understand the secret behind the haunting and how it relates to his own childhood.

Daly's all-American looks help explain his success on various TV series from Wings to Private Practice but he lacks the emotional depth to support an entire movie, ghost story or otherwise. Basically, you never care if the ghosts get the better of him. The opposite is true of Saldana, on the verge of stardom thanks to her roles in Star Trek and James Cameron's Avatar. Saldana brings a much-needed jolt midway into the film helping to accentuate its few, solid frights. Tom Arnold, as Becket's law partner, Robert Prosky as a local Catholic priest and Ed Herrmann as Becket's longtime psychiatrist, provide solid but otherwise forgettable support.

Bardwell, whose previous film was the coming-of-age gay comedy Dorian Blues, brings solid technical skills to The Skeptic but little talent for generating consistent suspense. Emphasizing psychological scares over effects-driven shocks or gore, Bardwell ends up with a fractured drama lacking the climactic surprise that all good supernatural thrillers need to be successful.

Cinematographer Claudio Rocha is responsible for much of the film's polished appearance, especially its exteriors in Saratoga Springs and Ballston Spa, NY. Production designer Susan Block helps create a believable haunted house. The storytelling, which sputters throughout, fails to match the film's production values. Blame belongs to Bardwell and editor Ann Marie Lizzi.

Daly will continue to find success on TV, although it's unlikely he'll land a lead role in another film soon, independent or otherwise. For Saldana, whose star keeps shining brighter, The Skeptic will become a forgotten early step towards a successful career in films. The same may also be true for Bardwell, as long as he returns to teen comedy and stays away from horror.

For IFC Films, which plans on a steady stream of genre movies throughout 2009 under its IFC Midnight banner, The Skeptic will fail to match the modest box office performances of its recent horror releases The Last Winter and Black Sheep. The Skeptic's best chance at finding audiences will be via on-demand and home video; leaving IFC still without a strong genre hit.