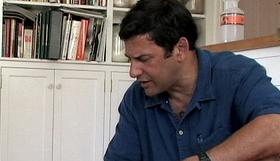 The entire Lyme disease story, its origins 40 years ago in Connecticut, current sufferers struggling to get better and the select doctors and researchers battling the medical establishment in order to help them, combine to make director Andy Abrahams Wilson's illness documentary Under Our Skin a complete and somewhat encyclopedic account of the mysterious, wide-spread ailment. A lack of compelling human drama—what’s necessary to lift the film from an austere medical tale to audience friendly feature—will severely limit box office potential when Shadow Distribution releases Under Our Skin in NY and LA in late June.

Wilson, whose twin sister suffers from Lyme disease, provides sparkling photography as the film's cameraman. Clever graphics that explain the bacteria behind the disease and some interesting talking head interviews from patients and their doctors fill out much of the rest. What's missing is a level of emotional suspense and a sharper focus on one or two compelling characters that could bring the movie to life. Except for a brief sequence with sufferers and families protesting angrily against policies of the Infectious Diseases Society of America (IDSA), Under Our Skin is as lifeless as a methodical medical journal article, even despite the life-and-death struggles of its subjects.

The subject of Lyme disease and promotional support from outreach partner Turn the Corner Foundation will attract people with personal connections to the illness as well as members of the medical and scientific research communities, but not enough for Under Our Skin to compete in the specialty film marketplace. Expect modest box office similar to that of the Tourette's syndrome documentary Twitch and Shout and the cochlear implant film Hear and Now. Better results will come from home video and cable broadcast.

Wilson, founder of Open Eye Pictures, the producer of Under Our Skin, and best known for his dance documentaries, gathers some interesting subjects: Mandy, a newlywed whose health quickly deteriorates; Jordan, a former park ranger; Dana, who works on tour with rockers U2; and Marlena, a teenage ballet dancer confined to a wheelchair. By juggling each person's story, Wilson never fully captures any of them, especially blonde, pretty Mandy, arguably the subject with the most onscreen charisma.

Editor Eva Ilona Brzeski keeps the film moving swiftly, making good use of archival news footage and the numerous interviews. Wilson, who also has a close friend with Lyme disease in addition to his sister, sees the mysterious illness as a fascinating topic worthy of feature documentary treatment. (It also provided background drama for the recent specialty drama Lymelife ). His inability to place a compelling human face on the disease, whether doctor or patient, derails his good intentions at raising awareness. Perhaps, Lyme disease is worthy of feature film treatment. If so, it will require another director at the helm.