close
Forget balloons, they should sell UP seatbelts at concession 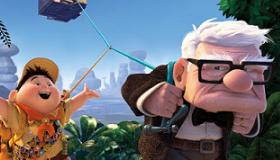 Breathlessly quick action comedy is every bit as sweet and imaginative as you’d expect from Pixar; a company name as synonymous with quality as innovation. Breakneck speedy, hysterically funny and appropriately lithe, UP handles itself in action with the same intensity as with comedy, never stopping to leave room for a laugh or a gasp—though plenty of intimacies and heartrending moments are handled deftly in montage. Story of an old man who seeks adventure late in life surprises and charms, and will rake it in like the instant classic it is.

“Breakneck” and “breathless” aren’t words commonly associated with films about octogenarians, (well, maybe breathless, but not in that context) yet here it’s just right. As a kid, Carl Frederickson (perfectly voiced by Ed Asner) was thrilled by adventure. From young he fixated on an adventurer named Charles Muntz (Christopher Plummer playing a cross between Amelia Earhart and Allan Quatermain), whose iconic dirigible was appropriately titled “The Spirit of Adventure.” Carl fell upon a girl, a manic pixie dreamgirl of sorts, who’s shared excitement for exploration took the quotes off “The Spirit of Adventure” and promised to help him realize his fantasies of discovery. Limitations kept the couple from traveling as they’d liked and when Carl finds himself a widow (oh, will you cry!!!) he’s besieged with offers for his house, which sits isolated and dim in the middle of a concrete maw of burgeoning developments and chain sushi shops. Left with little recourse, he sets his house afloat on a rainbow of balloons—with an unexpected stowaway. When Carl finds what he’s looking for he has to choose between his well-worn attachments and the characters that have fallen, literally, out of the sky and into his hands.

As with each of Pixar’s films, letting go and the loss that comes with it features prominently in the characters’ route to personal growth. Consider Finding Nemo ’s Marlin, whose kung-fu grip on his son (borne of a fear of loss) is the character’s central obstacle and motivation (can you just smell the efficiency of script!). Or Mr. Incredible, whose hubristic attachment to his glory days, paired with a fear for his family, keeps him working solo and incognito. In tandem, a central theme about relationships follow and typically that theme touches on matters of community and world issue at large (e.g. WALL-E ).

Iconic motifs carry us visually through UP and their efficiency allows the film to move at a good clip without losing us. Carl and his wife Ellie have a host of tiny, poignant icons that signify both their love of adventure and their romantic bond. As the film’s hero is a man who straddles the old world and the new, he sees his icons evolve into different, if functionally similar, signs. Ellie makes badges out of bottle caps and this is the tool that signifies their membership in a club (to quote Kurt Vonnegut’s Mother Night ), their “nation of two.” Later, Carl’s stowaway, Russell, comes seeking help earning an Elderly Assistance badge, the final badge in his Wilderness Explorer sash. Similarly, Carl and Ellie looked for shapes in the clouds and when he lands his house by a waterfall, he sees through the fog a series of rock formations that mirror Ellie’s gestalt clouds, but with far more danger and far less romance. With time, the rainbow colored arc of balloons that provide his escape are repeated in the plumage of a rare bird that’s both the object of the villain’s desire and a metaphor for the exploitation of life in service of man’s reach for history. Yet, the most indicative and profound of these icon transformations is the one that watches the spirit of adventure become the goal of conquest (or development). When Carl’s house is threatened with fire, he turns his back on the bonds he’s willfully avoided from the start. “None of this concerns me,” becomes his (and by extension, everyone’s) admission of isolation, anxiety, repressed anger. The armchair explorations truly crash and burn just moments later.

Russell’s sweet revelation that “it’s the boring parts I remember best,” is an ironic statement in a film that moves at the speed of hurricane wind. Still, the most memorable and gut wrenching moment comes from the briefest shot of Ellie, just after she’s learned she can’t live out one of her dreams. She sits meditative in a chair in their yard, somehow just assimilating to her new condition. The resolve and relenting present in her expression are uncanny, and remind us that the path of growth involves surrender, and the duration of youth requires (to invoke Eisenhower) eternal vigilance.