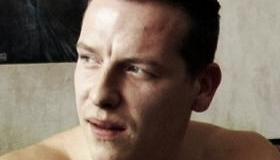 Till (Florian Bartholomäi) receives some bad news. His apprenticeship is over and he has to figure out how to bide his time (so, off with the white-stained jumpsuit and on with the street getup). His pal is a prick on parole named Karsten (Gerdy Zint) who bullies Till and spits venom at his submissive mother. Together, they are a deranged duo with nothing but shadiness on tap.

Writer/director Christian Klandt concocted this Kids -meets- Crash piece and while the feature can hold a steady shot and deliver some pulsating drama there’s a bit too much going on. The two youths are constantly sparking a joint or downing a beer. They loot recycling plants and re-recycle (if such a word exists) and commit pranks. The one where they kick over a port-a-potty while a guy’s inside it—swimming in waste—is especially tickling.

What begets the film’s disorder are the clusters of in-between characters. There’s a paunch 50-something man who sets-up a hot dog stand only to be subjected to anti-Semitism. A cop sniffs around for a new pair of pricey sneakers. Does he have nothing better to do? His whole mantra is offered than forgotten until the later on when he reappears with authority. And even then there’s really no point. Of course, Steffi (Karoline Schuch), the young girl who works at a tanning salon and who decides to go the distance with Till on this day is a good angle. But she’s barely in the film.

Too many minutes spent dilly-dallying with these rejects and the whole time you hope that a pure or clever thought or action will sprout. But no. It just keeps flowing downstream. More booze, more disregard for humankind. Why they felt the need to pick on an old man who was catching some Zs is anyone’s guess. Did he deserve to be urinated on? They thought so. And lighting him on fire had to have been part of their way of protesting the heavens for more light during the day. The notion being: when you don’t have a cause just wing it and plea insanity.

The style and cadence lack the stuff that its trying to emulate. Gus Van Sant may always include a couple pubescent boys taking their shirts off. Harmless, really. Whatever one thinks, the Portland-based director has the most uncanny eye. And Larry Clark pushes the bar and doesn’t pull punches when it comes to teenage angst. And many others talk a little dirty under the covers when they write/shoot their movies but can justify it. But this offering plays with fire and everybody (the cast and crew included) gets burned.